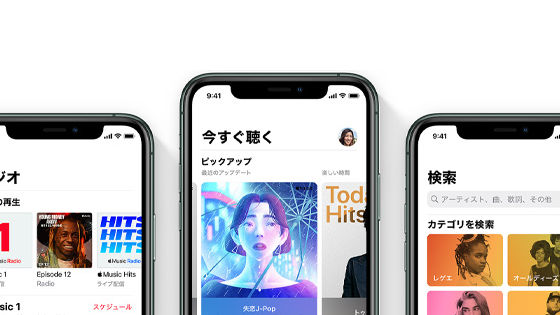 Is a music streaming service of Apple 'Apple Music' is, that corresponds to the 'space by Dolby Atmos audio' and 'lossless audio' has been presented at no additional cost. A new dimension of sound will be available in June 2021.

On May 17, 2021, Apple announced the introduction of Dolby Atmos spatial audio in Apple Music. About spatial audio, Apple describes it as 'giving fans the opportunity to create an immersive audio experience with true multidimensional sound and clarity.'

In addition, Apple Music subscribers will be able to listen to over 75 million songs with lossless audio as the artist produces in the studio. As a result, Apple Music will be 'the industry's highest level of sound quality.'

Spatial Audio & Lossless Audio support for Apple Music will be available in June 2021 at no additional cost. However, it is unknown when it will be provided in detail.

The screen of the newly reborn Apple Music is as follows. It looks almost the same as Apple Music at the time of writing the article, but you can see the notation such as 'Dolby ATMOS' 'Lossless' 'Apple Digital Master' in the red frame part. I will. 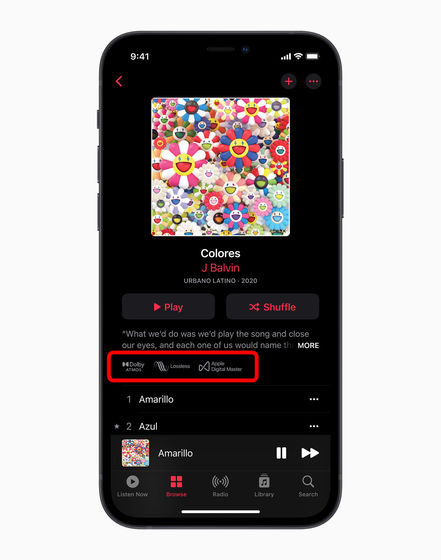 Support for Dolby Atmos spatial audio allows artists to mix music so that it can be heard from all directions and overhead. By default, Apple Music can automatically play Dolby Atmos-enabled songs from all AirPods and Beats headphones with H1 or W1 chips, and the latest versions of iPhone, iPad, and Mac built-in speakers. .. Apple Music will continue to add new Dolby Atmos-enabled songs and curate special Dolby Atmos-enabled playlists to help listeners find their favorite music. Not only are thousands of songs compatible with Dolby Atmos's spatial audio provided, but many artists are already working on creating songs compatible with spatial audio. In addition, Apple and Dolby will double the number of Dolby-enabled studios in major markets, offer educational programs, and become independent artists so that musicians such as musicians, producers, and mixing engineers can easily compose songs at Dolby Atmos. We are promoting activities such as providing resources for.

In addition, over 75 million songs will be available on lossless audio on Apple Music. To start listening to lossless audio, subscribers using the latest version of Apple Music must turn on Audio Quality from Settings> Music. The lossless level of Apple Music ranges from '16-bit / 44.1kHz' to '24-bit / 48kHz' of CD quality, and it can be played as it is on Apple terminals. In addition, we will start offering high resolution lossless up to '24bit / 192kHz' for real audiophiles.

'Apple Music is making an unprecedented breakthrough in sound quality,' said Oliver Schusser, vice president of Apple Music and Beats at Apple. Listening to songs at Dolby Atmos is magical. Music pours down from all directions and gives listeners a wonderful sound. We give listeners this truly innovative and immersive experience with J. Balvin, Gustavo Dudamel, Ariana Grande and Maroon 5 Delivered with the music of many of your favorite artists, including, Casey Massgraves, The Weekend, and more, subscribed to listen to their music in the best quality of lossless audio. Apple Music, which we know, is about to change completely. '