The number of simultaneous users of Steam has exceeded 26 million, and the increase in game demand due to the new corona will continue in 2021 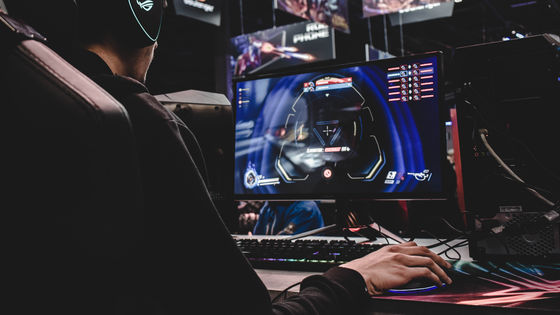 Due to the pandemic of the new coronavirus, game demand is rapidly increasing, and

the total viewing time of game-based live streaming has increased by nearly 50% ina month, and the monthly sales of the digital game market have reached a record high . In addition, the PC game platform Steam also set a record high for the number of simultaneous users multiple times from February to March 2020, when the new coronavirus began to spread worldwide, but in 2021 It was revealed that this record was set even more significantly in February.

Approximately one year has passed since the spread of the new coronavirus started, but it seems that the demand for games continues to increase due to this, and in February 2021, the number of simultaneous users of Steam was the highest ever. It has been revealed that the number has exceeded 26 million.

Game industry analyst Piers Harding-Rolls reports on Twitter that Steam has surpassed 26 million simultaneous users. He updated Twitter on February 7, 2021, saying, 'Steam's concurrent users topped 26 million for the first time today. Simultaneous connections during the first pandemic lockdown period in the first quarter of 2020. After the increase, we set a new record in January and February 2021. '

Note: in-game CCUs have not matched the record set in March 2020 pic.twitter.com/xVhlwy780Y

The graph that summarizes the transition of the number of simultaneous users of Steam is as follows. The record high on February 7, 2021 is '26,299,026 people'. 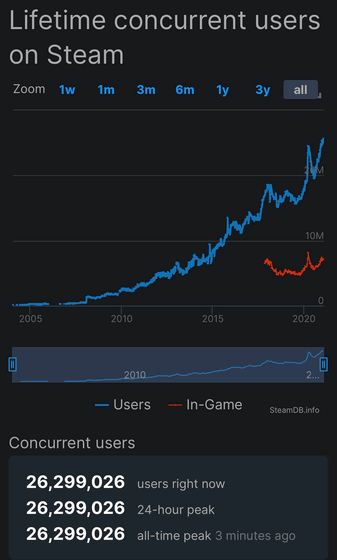 It is difficult to clearly identify the reason why the number of simultaneous users has increased significantly because it does not mean that 'the featured work was released and attracted many users'. The existing titlesCounter-Strike: Global Offensive (CS: GO), Dota 2 , Grand Theft Auto V , Team Fortress 2 and other popular titles have a particularly large number of players, and CS: GO is still played by more than 1 million people. It is said that there is.

Cyberpunk 2077 , released in December 2020, also contributed significantly to the increase in the number of simultaneous users. Cyberpunk 2077 has received a lot of criticism due to the frequent occurrence of bugs and crashes, but since the bugs are mainly found in the PS4 version and the Xbox One version, the PC version is more attractive to players. It has become.