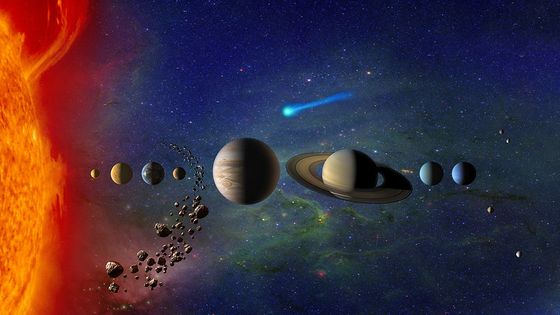 While the celestial bodies in the solar system are strongly influenced by the gravity of the sun located in the center, various planets including the earth also have gravity, which affects celestial bodies such as satellites that revolve around them. Is exerting. New analysis by researchers in Serbia and the United States has revealed the existence of a 'super highway in outer space' that can use these gravitational interactions to move at high speeds in the solar system.

The arches of chaos in the Solar System | Science Advances
https://advances.sciencemag.org/content/6/48/eabd1313 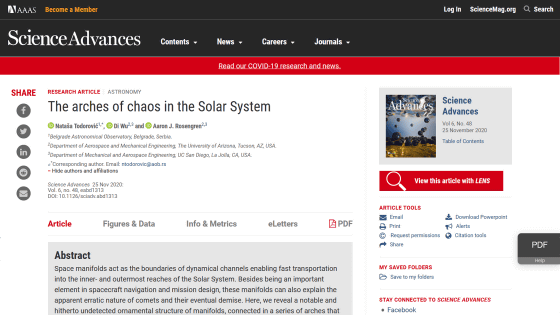 Researchers discover a new superhighway system in the Solar System

The celestial bodies that exist in the solar system include not only planets and satellites, but also innumerable asteroids and comets. The Centaur , one of such asteroids, revolves in an unstable orbit between Jupiter and Neptune , and it is thought that they will eventually jump out of the solar system.

In this way, planets are greatly involved in the movement of celestial bodies in the solar system, but the interaction of gravity seems to be very complicated. So a research team led by researcher at the Belgrade Observatory in Serbia, Nataša Todorović, collected numerical data on millions of orbits in the solar system and modeled the gravity-generated perturbations of seven planets from Venus to Neptune. Did.

As a result of the analysis, mechanically connected arch structures formed by the gravity of the sun and planets were identified, and the most prominent of them was related to Jupiter. To understand the effect of this arch structure on the movement of objects, the research team conducted a simulation of throwing thousands of virtual objects near virtual Jupiter.

It is said that 70% of the particles reached the position of 100 astronomical units (1 astronomical unit = average distance between the earth and the sun) within a century, and researchers can move this route in the solar system at an astonishing speed. We call it ' true celestial autobahn '.

Researchers also point out that similar mechanical arch structures will be generated on planets other than Jupiter on a scale commensurate with their orbital period. The discovery can be applied to missions to send spacecraft to distant outer space, and may help to deepen the understanding of comets and asteroids moving in the solar system.