The following table summarizes the specifications of the announced GeForce RTX 30 series 3 types and the high-end model RTX 2080 Ti of the previous generation RTX 20.

The RTX 30 series uses the Ampere architecture, which was just announced in May 2020. The adoption of the Ampere architecture has significantly improved power efficiency, and 'performance per power consumption has jumped 1.9 times,' NVIDIA says. However, AnandTech, a technology news site, said, 'The 1.9-fold number is a little exaggerated, so it may be about 1.5-fold at most.' On the other hand, the power consumption itself is also rising, and the thermal design power of the top model RTX 3090 is 350 W, the RTX 3080 is 320 W, finally exceeding the 300 W level. 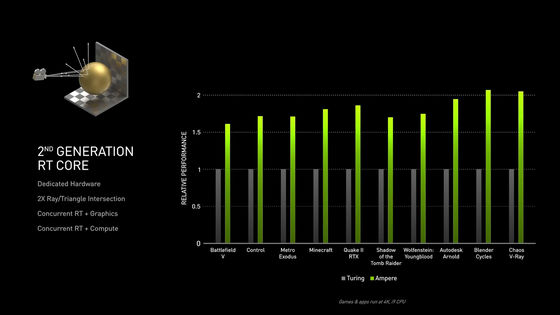 Although the GPU has not been announced, it is likely that GA 102 is adopted from the photograph of the GA 102 die Furthermore, unlike the RTX 20 series, which used TSMC's 12nm process, the RTX 30 series uses Samsung 8nm process. In fact, AnandTech from the photo of the die that has been leaked, with 500mm 2 little over a large area of GA102 is estimated, has pointed out that is even smaller than the TU102 of 754mm 2. As a result, the transistor density has increased significantly, and the number of transistors in GA102 has reached 28 billion. 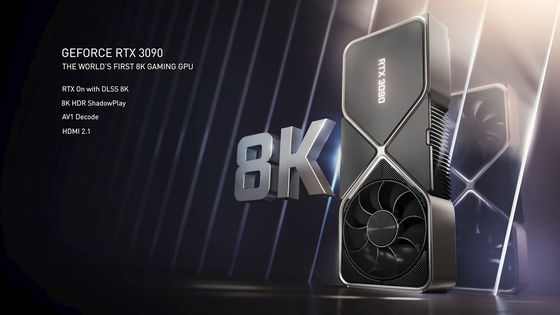 You can see the state of the announcement event from the following movie.