A virus strain very similar to the new coronavirus (SARS-CoV-2) was found in China in 2013 and was confirmed by the Wuhan Virus Research Institute in Wuhan, Hubei Province, China.・The Times reported.

Revealed: Seven year coronavirus trail from mine deaths to a Wuhan lab | News | The Sunday Times

Coronavirus Related to SARS-CoV-2 Found in Chinese Mine in 2013 Was Sent to Wuhan Lab
https://www.newsweek.com/coronavirus-related-sars-cov-2-found-chinese-mine-2013-was-sent-wuhan-lab-1515625 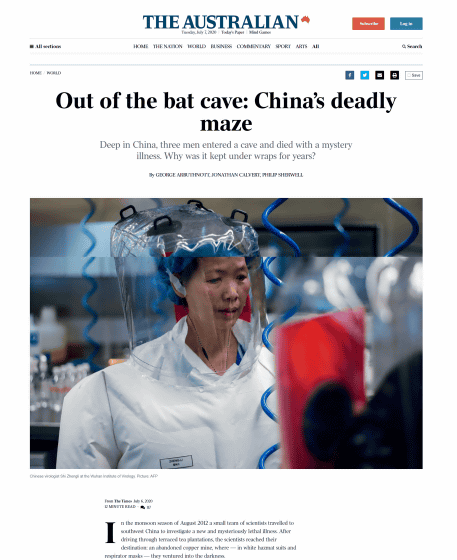 According to the Sunday Times survey, in 2012, six workers who had been removing bat dung at an abandoned mine at a copper mine in Yunnan suffered severe pneumonia. Workers had symptoms close to those of a new coronavirus infection (COVID-19), such as fever of over 39 degrees, cough, pain in limbs, and dyspnea, of which two died first. The four survivors underwent numerous tests for hemorrhagic fever, dengue fever, Japanese encephalitis, and influenza, all of which were negative.

Doctors sent a blood sample to the Wuhan Virus Research Institute to which Mr. Masayoshi Ishi, who researches viruses with bats as a host, belonged.

In 2013, Ishi and his colleagues headed to the mine to collect faecal samples from 276 bats and send them to the Wuhan Virus Laboratory for storage and analysis. The team discovered a new strain that closely resembles the SARS coronavirus , so four workers were tested for antibodies and all four were found to have the new coronavirus antibody. Two of the four recovered and returned home, but these two have also been shown to have higher antibody levels than those in the hospital. Since one of the hospitalized patients died later, the total number of deaths at this time will be three. Based on this research, Ishi et al. announced in 2016 that they found a new strain named 'RaBtCoV/4991' in the scientific journal Virologica Sinica. However, the paper did not mention that six workers were ill or died.

In February 2020, when the SARS-CoV-2 begins to popular all over the world, the stone said to the SARS-CoV-2 in Nature is closely related to the virus 'RaTG13' stored in the Wuhan virus

paper Announced . The paper notes that RaTG13 and SARS-CoV-2, discovered in 2013 in Yunnan, shared 96% of the genetic makeup.

The Sunday Times claims that the RaTG13 is 'almost certain' to be identical to the RaBtCoV/4991. RaTG13 and RaBtCoV/4991 are described as the same in the database of bat viruses released by the Chinese Academy of Sciences, the parent organization of the Wuhan Institute of Virology. 'The Indian and Australian scientists have confirmed that the genetic composition of RaBtCoV/4991 is 100% identical to RaTG13 and 98.7% identical to SARS-CoV-2,' the Sunday Times said. I am. In addition, Mr. Ishi emphasized the position that the new coronavirus ``was brought to the laboratory for the first time as a sample of a pneumonia patient of unknown cause on December 30, 2019, and I did not know the existence of the new virus before that.'' I am . Peter Daszak, head of the EcoHealth Alliance, a non-governmental organization focused on scientific research, also said to the Sunday Times that RaTG13 may have been found in the mine, but on the other hand, regarding the name change, `` I think conspiracy theorists say the name change is annoying,' he added, adding that the change in the coding system may be the factor.

The origin of SARS-CoV-2 remains unclear, but it is also open to experts to determine whether RaTG13 caused COVID-19 and spread worldwide. Australian virologist Edward Holmes estimates that it will take 'up to 50 years' for RaTG13 to evolve to be 100% consistent with the COVID-19 virus. On the other hand, Martin Hibberd of the School of Hygiene and Tropical Medicine at the University of London estimates that it will evolve in less than 20 years. Hibberd also dismissed the idea that researchers artificially manipulated the virus, saying, 'SARS-CoV-2 and RaTG13 are not the same virus, it is not easy to manipulate to change one to the other. '.