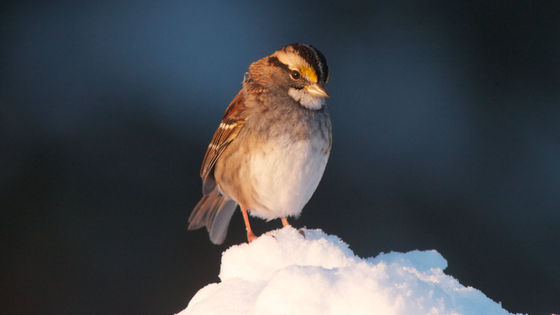 Ken Otter, a biologist at the University of Northern British Columbia in Canada, noticed that a male of the white-throated bird Nodjiro Citodo sings an unusual song when he moved to Canada. It was.

By playing the following movie, you can listen to and compare the normal Nojijiro Shitodo song with the new song Otter heard.


If you listen carefully to the end of the bark, you can see that a normal Nojijiro Shitodo song ends with three sounds... Otter's song, which he heard at his new home, ended with two sounds. And as a result of examining the way the song spreads based on the place where the song of Nodojiro Shitodo was recorded and the age, a ``song ending with two sounds'' born in western Canada around 2000 was eastern Canada by 2019 It reached Quebec, where it was found to have spread over a straight line distance of over 3,300 kilometers. The 'song ending with two tones', which is thought to have been born around 2000, will gradually be transmitted to the eastern part in 2004. Around this time, almost half of the songs sampled in Alberta, east of British Columbia, were 'songs ending with two notes.' Furthermore, in the late 2000s, the “song ending in two notes” began to be sung in central Canada. Then, in the 2010s, a “two-tone song” swept the western half of Canada and was fully established in this region. In 2015, all songs from central Ontario to the west, north of the Great Lakes in the United States, became 'two-ended songs.' And in 2019, the song 'Two-Ended Song' began to be sung in Quebec, which is located almost at the eastern end of Canada. ``A two-song song'' spread across western and eastern Canada, says Otter, 'as far as we know, it's a song unprecedented in any known bird species.' It was

To see why the song has reached such a wide range, Otter and his team have attached a small transmitter to the throated squirrel to investigate how it moves. by Ken A. Otter

As a result, it was found that the white-tailed cypress, which inhabits Canada, travels southward through the Canadian-American border during the winter and overwinters in Oklahoma and Texas, which are located in the southern United States.

Otter said, 'It's known that nodjiro shitodo sings in wintering areas, so young males may winter in the same area as other rural males, meanwhile learning new songs before returning home. There is.”

In addition, past studies have revealed that some birds have the property that females become unresponsive to old songs.

From this, Mr. Otter said, 'If the female of the white-throated cypress has a preference for a song that he hasn't heard before, then a male who can sing a new song would be very advantageous,' he said. It was suggested that the background of the new songs spread among them was related to female song preferences.