Why was the CNN black reporter who was covering the riot arrested during the live broadcast? Protests have spread nationwide from Minneapolis to the

death of a black man, George Floyd, who was seized by white police in Minneapolis, Minnesota. In particular, in Minneapolis, where the incident occurred, the building was set on fire, and the activity is already becoming a riot, but the CNN reporter who was interviewing was arrested during the live broadcast. An event has occurred.

CNN crew released from police custody after they were arrested live on air in Minneapolis-CNN
https://edition.cnn.com/2020/05/29/us/minneapolis-cnn-crew-arrested/index.html

Mr. Floyd's death was filmed by multiple cameras, and it was possible to confirm that Mr. Floyd had appealed to the police officer `` I can't breath '' just before he took a breath, so it was talked about, The demo expanded . There have been many riot cases.

Under these circumstances, CNN reporter Omar Jimenez, who was interviewing Minneapolis, the first occurrence of the riot, was arrested in front of the camera being relayed, handcuffed and taken. That happened.

You can see the video of the live broadcast that Jimenez is arrested in front of the camera from the following.


A police officer from the Minnesota Police Department, who sits side by side in front of the camera and answers the interview, backed by a shadowless building seen by the riots. I told the interviewers in a very calm tone, 'Can you step back?' The live broadcast took place shortly after the fire that occurred when the mob threw firecrackers. CNN's Omar Jimenez explains the role police play in the Minneapolis riots in front of the police force. My hand holds a microphone and a press card. A police officer in the back suddenly arrested Jimenez while the cameras were shooting the police in front. When the camera turned around, Mr. Jimenez had already grasped his arms from both sides and had just been proclaimed 'I will arrest you'. Jimenez asked, 'I'm sorry. Could you tell me the reason? Why am I arrested?', But the detention continues ... 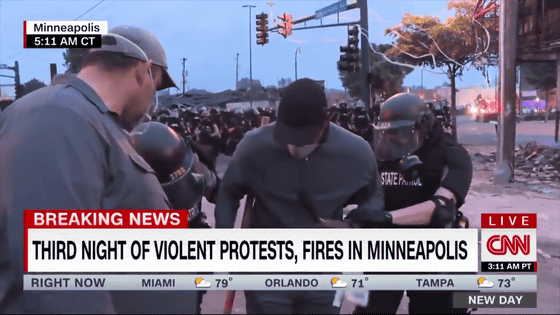 My back was assembled and I was handcuffed. Mr. Jimenez, who has been handcuffed, will be taken to the police as it is. Next, Bill Kircos, the producer of the interview group, was also detained. Even cameraman Leonel Mendes has been detained, so the camera is on the ground. 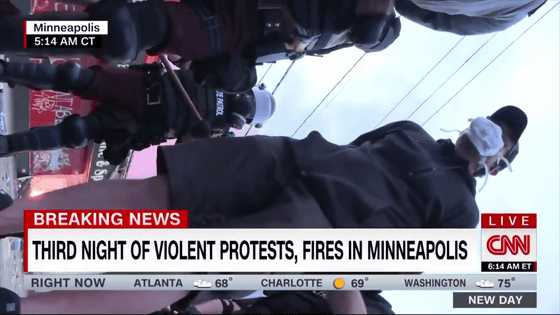 In this way, three members of the CNN interview team, Jimenez, Kirkos, and Mendes, were arrested and taken.

Immediately after being arrested, CNN claimed that coverage of protests in public was allowed ' free press ' by the first amendment of the United States Constitution . I appealed for the release of three people.

A CNN reporter & his production team were arrested this morning in Minneapolis for doing their jobs, despite identifying themselves-a clear violation of their First Amendment rights.The authorities in Minnesota, incl. The Governor, must release the 3 CNN employees immediately.

The three were released about an hour after being transferred to a secure building in downtown downtown. 'I was treated in good faith after being taken,' Jimenez explains.

Minnesota police said of the arrest, 'I ordered to move, but detained because I did not move. I could not confirm that I was a press person.'

In the course of clearing the streets and restoring order at Lake Street and Snelling Avenue, four people were arrested by State Patrol troopers, including three members of a CNN crew.The three were released once they were confirmed to be members of the media.

In response to Minnesota police's views, CNN protested that it was 'inaccurate,' claiming to be a journalist during the live show. Governor Tim Waltz of Minnesota apologized for the incident, saying that 'there was no justification for this arrest,' and said he was entirely responsible for it.

Meanwhile, CNN reported that while Latin black men Jimenez and Hispanic mendes were arrested, white reporters who were also interviewing were not arrested. The arrest of Jimenez and his colleagues suggested that racism was involved, as was Floyd's event.