How do you design the 'attractive fictional weapons' that appear in the game? 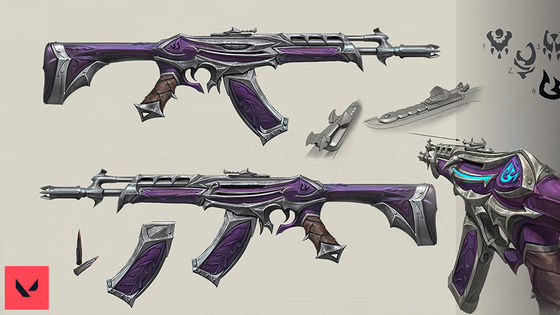 Riot Games, a game maker known to operate and develop League of Legends, is designing weapons that will appear in FPS ` ` VALORANT '', which is the company's new title and beta version is being pre-delivered, blog Is explained in.

The Craft and Fantasy of VALORANT Weapon Skins
https://beta.playvalorant.com/en-us/news/dev/the-craft-and-fantasy-of-valorant-weapon-skins/

VALORANT producer Preeti Khanolkar explains on the official blog how he designs weapon skins that change the appearance of the weapons in the work. He also runs a premium content team with Sean Marino, the arts leader in VALORANT development, who develops customized items such as weapon skins, gun buddies, and sprays. That's right. 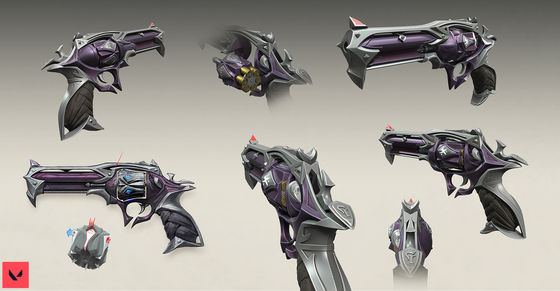 the basic policy of weapon development that 'a gameplay priority approach will be taken in all situations', and skin development can show the individuality to the player 'to the extent that other players' gameplay experience is not impaired' It seems to provide a method.

-Elements such as skin model, appearance, visual effects, animation, and sound should be immersive enough from the first person perspective.
-Only the weapon model (shape) can be seen from another player's perspective (third-person perspective).
・ Never adopt the Pay to Win element.
・ If you find a skin that violates the above three rules, fix it immediately.

In the development of VALORANT, the development team puts particular importance on 'whether or not the player wants'. “We create weapon skins for our players, so our great team of developers scrutinizes the enormous amount of player survey results and lab feedback we receive, We're exploring the themes players are looking for in VALORANT, whether it's a genre such as traditional science fiction or high fantasy , or whether it should create something completely abstract. It is also utilized in exploring the direction of the game, such as '.

Once the theme is decided, ideas will be put out subsequently. It seems that new ideas can be created by asking concept artists for rough sketches or expanding existing ideas. The following pictures are taken of the idea out put with more than 130 stickers on the whiteboard. Khanolkar commented on the idea that the development team had done, 'In the early stage of brainstorming , we ask' If that is it? ' 'I don't say that.'

Regarding how to distinguish between ideas that are adopted and those that are not adopted among multiple ideas, the development team seems to ask multiple questions for each idea. Also, members who are against the idea and members who oppose the idea will be gathered, work to create a concept from the idea, and it will be sublimated into a concrete image to express the idea in the game.

'I don't want to start creating skins without clarifying what I'm actually trying to make,' Khanolkar said. 'By answering these questions, I put together the thoughts of the dev team and put the whole game together. We unify our vision so that the physical experience is cohesive. '

Once the development team has finished creating ideas and the ideas to be adopted have been decided, the concept artist sometimes creates concept art for skins from abstract ideas. Concept art is brushed up multiple times, and after the final concept art is completed, if this concept has a fantasy element suitable for the game called VALORANT and it is judged that it meets the restriction in strict game play, the model of the skin will be created. Note that 'strict restrictions on game play' means, for example, 'the model of the skin matches the silhouettes of both the first person view and the third person view of the base weapon, and can be recognized even if it falls on the ground. And so on. 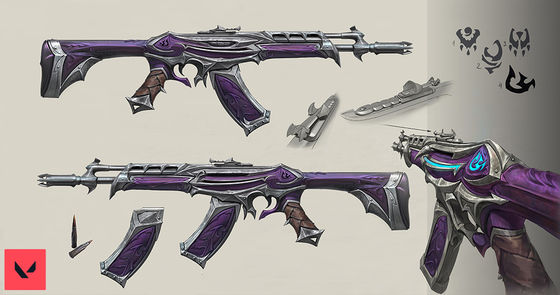 You also need to maintain the impression of weapons based on new weapon skin animations. The reason for this is that if you are using weapons of the same performance but the feeling of use changes, the player will be at a disadvantage. Khanolkar said, “You don't have to relearn the behavior of your weapons, even if you use a new skin. The sensations of shooting should be the same, you shouldn't feel slow. It's okay if you feel it quickly, but it shouldn't actually be faster, 'he said. In addition, Khanolkar also explains that since it is FPS, it is not possible that 'the screen occupancy will change depending on the skin even with the same weapon'.

However, in very rare cases, it seems that in order to protect the fantasy elements of weapon skins, we sometimes make exceptions and break some of the above rules. For example, it is not supposed that the screen occupancy of the same weapon changes depending on the skin, but it is possible that the screen occupancy of the skin may increase only slightly due to the animation when equipped. There is. ' However, it will be approved after a large amount of tests and whether it is free from Pay to Win elements.

Furthermore, the focus of players in VALORANT is the action itself that directly affects the victory, such as setting and releasing kills and spikes. The development team fears that this will change depending on the skin of the weapon. Therefore, the visual effects associated with weapon skins should 'look cool, but never distract,' Khanolkar explains. Therefore, in VALORANT, the shape and size of the

muzzle flash does not change depending on the weapon skin, and the trajectory of the bullet is adjusted so that it can be seen only from the first person's perspective of the person who fired it.


In addition, sound effects are an essential element for properly expressing fantasy with weapon skins. However, since the sound effect varies depending on the skin, you should not be in a situation where you may miss important sounds in the game when using a specific skin.

Therefore, when using a new sound effect on the weapon skin, make adjustments so that the sound is not louder or softer than the sound effect of the base weapon, but still select the sound effect so that you can see the difference. is. In addition, I am trying to combine sounds with parts related to game play in animations such as reloading ammunition, but the timing at which sounds are played and the timing at which sounds disappear in these animations should be as much as possible. He says he is trying to do the same.

If you want to play the sound effect at the timing when the sound does not sound with the base weapon, it is possible to entertain the player by adding the sound effect, and only if the skin theme can be expressed well. However, for sound effects that are purely decorative, the volume has been adjusted to decrease when there are more important sound effects around the player in game play. 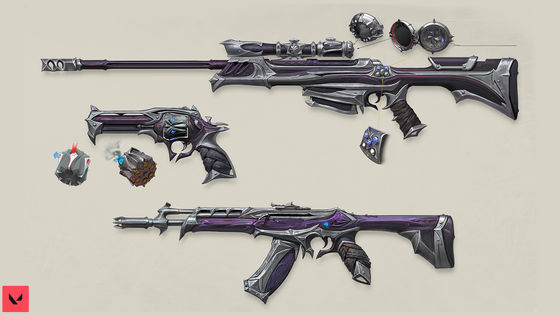 Designed according to these rules, the new weapon skin is designed by the design playtest team to playtest twice a day, and the fantasy expressed by the skin is realized as expected, and the gameplay. Once again, the strictness is checked to see if the restrictions in are followed. It will collect feedback on all skins and try to find out how to express fantasy elements while not compromising the competitiveness of the game. The Design Playtest team is one of the toughest critics on the development team, and 'that's why we can count on it,' Khanolkar said.

Among the feedback from the design play test team, 'I do not want to buy in in-game currency at all because it is so distracting' that actually helped improve the skin, 'Speed and smoothness of running animation, reaction Sex doesn't feel the same as running with a base melee weapon. '' I can't feel classic. The amount of damage actually given does not match the impression obtained from sound effects and visual effects. It's cool, but it's a little bad for gameplay, and the model is quite big, 'he said.

In addition, the development team of VALORANT says that it will be known when the opinion of the player is heard whether or not the weapon skin production has been successful, and if the official version is released, more opinions will be obtained , Will be able to make better weapon skins. In addition, VALORANT will be officially released on June 2, 2020 in Japan.