An optical chip that can download 1000 high-quality movies in 1 second is developed, the communication speed is 44.2 terabits per second, a new world record 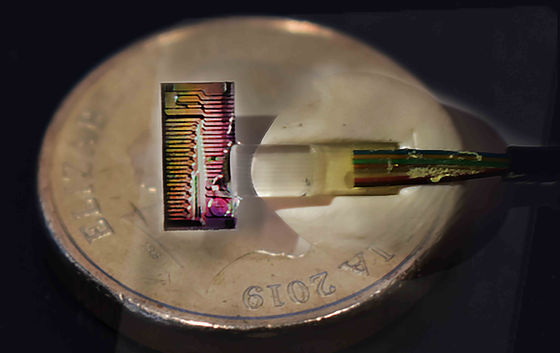 The optical micro-comb developed by the research team allows 80 individual laser beams to be replaced with a single signal generator, which allows data to be transmitted at multiple frequencies simultaneously. When the research team actually used the optical microcomb to test the communication speed with a 76.6 km long optical fiber line laid in Melbourne, Australia, the data transfer rate reached 44.2 Tbps. This is a speed that can transfer data equivalent to 50

Professor David Moss, director of the Center for Optical Sciences at Swinburne University of Technology, said of the test results: 'In the 10 years since I first created the microcomb, it has become a very important research area. 'By setting a new world record for bandwidth over a single optical fiber, we have great potential to meet the insatiable demand for the Internet around the world.'

“The microcomb will be used for ultra-high speed communication between data centers for the foreseeable future,” said Arnan Mitchell, professor at the Royal Melbourne Institute of Technology. It's easy to imagine that people will be able to use it, and in order to do that, in the future we would like to build an optical chip on existing fiber optic networks that would allow this level of communication at the lowest cost. I am doing it. '

Regarding the future of microcombs, Dr. Bill Corcoran, a lecturer at Monash University, said, 'It's not just that Netflix will be useful. This technology can be used for future transportation such as self-driving cars. In addition, it can be expected to be used in fields such as medical care, education, finance, the electronic commerce industry, etc. In addition, it is possible to open up new frontiers such as the realization of 'thinking light' like AI using artificial optical neural networks. I was motivated for further research and development.