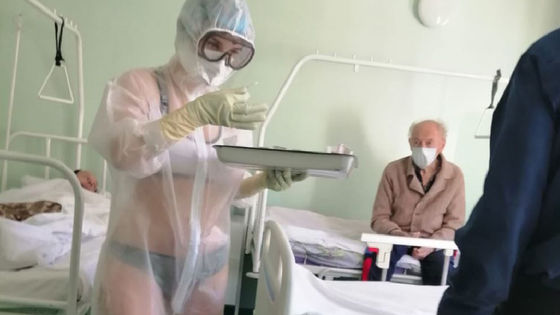 In Russia and the new coronavirus infection (COVID-19) is rapidly expanding, infection cases of May 22, 2020 317,554 items became second only to the United States. At the forefront of medical care in Russia, the appearance of medical staff trying to cope with poor equipment and environment is becoming a hot topic on SNS.

The Russian 'bikini nurse' is now a meme star (PICS)-Russia Beyond
https://www.rbth.com/lifestyle/332213-russian-bikini-nurse

Local media Тульские новости in Tula, an industrial city in western Russia, featured a photo from a reader on May 19, 2020. The picture, taken by a male patient admitted to the Tula Regional Clinical Hospital, shows a medical worker in a swimsuit under transparent protective clothing while being treated. Several media, including Тульские новости, report women as nurses, but there is also information that they are 'doctors, not nurses.' The British daily newspaper Daily Mail reports that the woman is Nadia, a 23-year-old nurse who studied medicine at Ryazan State Medical University in Russia.

An informant, who posted a photo to Тульские новости, said, 'No one patient in the ward had any objection to the woman's clothes. However, she was still shining and staring at the woman quite often.' I testify that.

An example is below. A tweet saying, 'It's a wonderful medical worker! Grandpa will also get up from the ventilator!'

There was also an Instagram user who uploaded the illustrations with the caption, 'I would like to convey the feelings of support to the medical staff of Tula! If such dedicated medical staff increase, any illness will be cured immediately.' ..

In addition, many illustrations with the theme of this medical staff appear on SNS.

But it's not all positive reactions. Budiansky Vladimir's Facebook users is 'I do not think only to be to fool the patient and work. If this is not a Gase, be sure to request an administrative investigation so as to retirement this nurse,' said that, the anger I exposed it .

In addition, women's clothes also violated the hospital's service regulations, Тульские новости said, `` The Department of Regional Health of Tula Region said that the staff of the Tula Regional Clinical Hospital did not comply with the medical dress regulations. I have given disciplinary action to the medical staff. ' Although the specific details of the disposition are unknown, it is said that no punitive sanctions have been taken. In addition to individual disposal, the Tula Regional Clinical Hospital strengthened service regulations and held briefing sessions for staff.

Medical staff criticized the hospital's response to the disposal of medical personnel who were wearing protective clothing while keeping out the heat. Anastasia Vasilyeva, a representative of the Russian medical worker union Alyans Vrachei, said: 'The female health workers in the picture in question appear to be wearing some kind of plastic protective clothing. , Protective clothing should not be transparent like this, it should be made of a more neat fabric, 'he said, saying that the personal protective equipment provided by the hospital is of poor quality. I pointed out that. 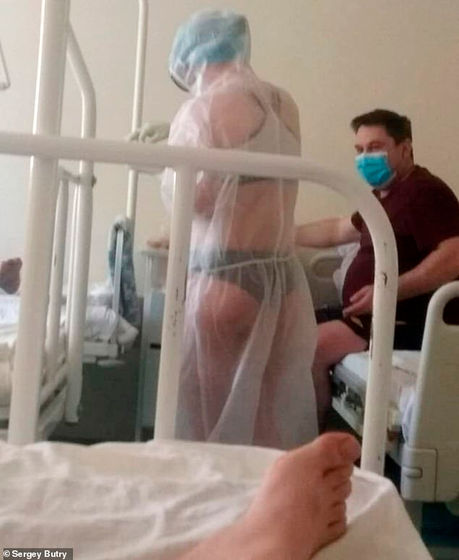 In addition, the staff of the Tula Regional Clinical Hospital, who responded to an interview with the Russian daily newspaper Комсомольская Правда on condition of anonymity, said, `` I haven't seen a scene like the one in the picture, so I dressed for only a very short time. would it did not. in this matter, she is shocked and scared that it would be be dismissed 'and we talk .

On the other hand, Anastasia Yakusheva, a representative of the underwear and negligee brand 'Miss X', told Daily Mail, 'I want the famous Tula medical staff to become a model of our underwear brand. Already, we are ready to offer our new product for her, and in the future we have a plan to have an annual contract with her, 'he said. I suggested that there will be other ways even if it becomes unnecessary.