A creature like `` super huge string '' with a total length of 120 meters is discovered, it is possible to pass the blue whale and be the world's longest creature The largest animal in the known organisms

blue whale but it is thought that it is, overall length is 'huge creatures, such as the string' where there is likely to become the longest beyond the blue whale, discovered by deep sea exploration Was.

Otherworldly, String-Like Organism Spotted in Deep Sea Is Made Up of 'Millions of Interconnected Clones'
https://www.newsweek.com/otherworldly-150-foot-long-string-like-organism-deep-sea-millions-interconnected-clones-1496512

What The Heck Is This Long, Hypnotic Stringy Thing Floating in The Ocean?
https://www.sciencealert.com/researchers-filmed-the-longest-known-stringy-stingy-thingy-floating-in-the-ocean

This is a movie of a giant string-like creature taken by the Ningaloo Canyons research team with an unmanned underwater vehicle (ROV) . Investigators filmed the footage in the Indian Ocean off the Ningaloo coast in western Australia.

In the footage of about 30 seconds, a long white rope-like shape is swirling around the sea. According to the Schmidt Ocean Research Institute, this string is large

Kudakurage which is a kind of Apolemia and things. At first glance, it looks like a single creature, but in fact, it seems that countless individuals are connected in this shape.

Rebecca Helm, an associate professor at the University of North Carolina at Asheville, commented on Apolemia, 'Millions of clones are linked together to form colonies. The role of colonies is divided into more than 10 types. , Each individual is specialized for a particular role. '

Some of the clones specialize in catching prey. Their slender bodies hang with a single long tentacle dangling like a hook-studded fishing line.Like the frilled tentacles of another siphonophore pictured below ...
(pic: @SchmidtOcean https://t.co/UIJt6aLSNn ) pic.twitter.com/7nDOKFqSUZ

In order for so many individuals to behave like a single creature, they need to communicate with each other by sharing information and transmitting instructions, but Brown University, who was interviewed by Wired , an IT news site , According to oceanographer Stephen Sievert, 'It is a mystery how each individual communicates.'

According to Helm, most of the Apolemia found so far are 20cm at most 1m long. On the other hand, the Apolemia discovered this time is estimated to reach a diameter of 49 feet (approximately 15 m) and a total length of 154 feet (approximately 47 m) only in the part captured in the image. This is comparable to an 11-story high-rise building and is well above the blue whale's 34m record. 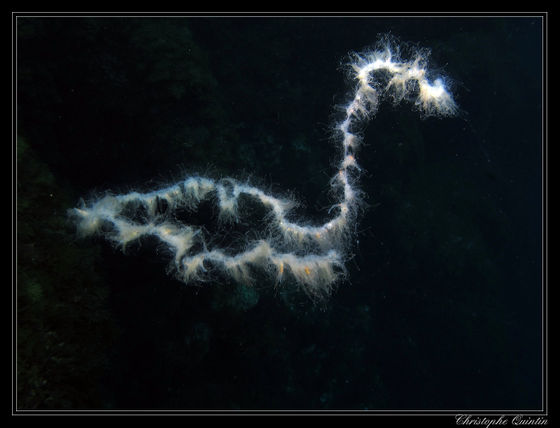 'The overall length of the creature seems to be much longer than the one captured here,' said Logan Mockbanting, a spokesman for the Schmidt Institute for Marine Research. According to reports, the total length can reach about 120m. ' The Schmidt Institute for Ocean Research is currently waiting for the results of external confirmation to confirm the measurements.

Helm says of Apolemia's age: 'Deep-sea creatures grow terribly slowly, so it is difficult to pinpoint their age accurately, but probably not for decades to hundreds of years. I wonder? '

`` This expedition to explore the Ningaloo shores in western Australia will be a great opportunity to shed light on the unknown biodiversity of the area, '' said Nerida Wilson of the Western Australian Museum, who heads the research team. Talking and motivated to make further discoveries.