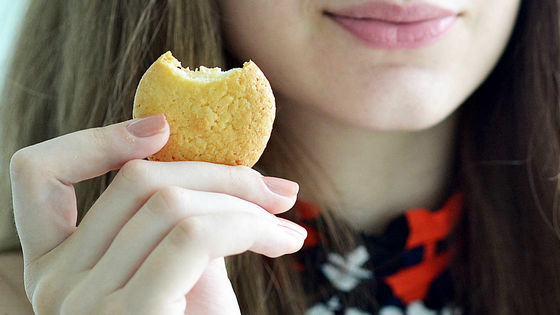 To get a healthy and slim body, it is important to calculate calories while eating well. However, low-calorie menus often feel unsatisfactory, and there are many people who have experience that stress adversely affects them, or that they reach out to high-calorie menus. A technical study called ' FoodFab ', which was conducted in collaboration with the Massachusetts Institute of Technology (MIT) and Osaka University, uses the technology of printing food with a 3D printer to increase or decrease satisfaction after meal with the same calories By trying such things, we aim to revolutionize diet and healthy eating.

3D printers are moving from the area where three-dimensional objects are printed using plastic, resin, metal powder, etc., to the printing of food materials to create 'edible three-dimensional objects'. Solving global challenges related to obesity and other diet-related disorders in the upmarket restaurants creating new types of creative menus, and in attempts to shape soft mashed foods for the elderly into attractive forms Because of this, attention is gathering. 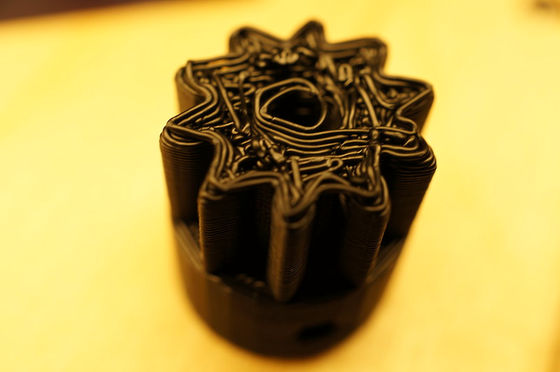 In the field of food × 3D, investigations are being conducted to see if it is possible to change satisfaction not only in the visual part such as how to arrange and set the plate, but also in the perceptual part such as texture and texture. Even in the technical field, although the approach of changing food to a different appearance in augmented reality (AR) has been successful, it is necessary to avoid looking at the original food material before changing it and the user needs to change the hardware. It was difficult to prepare, and there were some challenges left. Well, 3D printers can solve it by simply providing the finished food.

In the experiment, foods (cookies) with various internal structures were created by a food 3D printer, and 30 participants were tested with an EMG sensor and a self-report questionnaire. Cookies were used in addition to cookies (image a), avocado puree (image b), pork puree (image c), ganache (image d), etc., which was necessary for food 3D printing research. It seems that it was the most satisfying factor of 'forming a sturdy structure at room temperature' 'maintaining shape and size by passing fire'.

In the experiment, the participants were asked to fill out a questionnaire to measure their sensory satisfaction, and then they were asked to eat as many cookies of a particular type as they wanted for each session. Cookie time was not allowed to drink water to prevent thirst from affecting appetite, and each session is held on a different day to avoid the effect of becoming full. 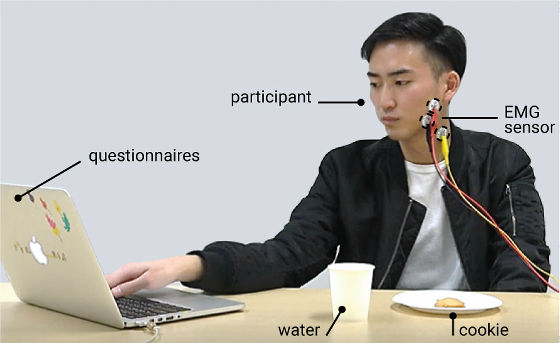 First, we compared three types of cookies with the same size but different internal structures, and measured the difference in chewing time due to each internal structure, and the change in satisfaction with it. The left side of the image is a “honeycomb type” that looks like a circle, the middle is a geometrically curved “Hilbert type”, and the right side is a lattice-shaped “straight type”. Although the structures are different, the sizes are almost the same, and the materials used are set to the same amount.

In addition, when asked about the participant's evaluation of 'how full they were' in the questionnaire, the answer was that their feeling of fullness increased by an average of 21.30% when they ate honeycomb type cookies. In addition, the Hilbert type increased by 19.51% and the linear type increased by 17.13%, indicating that the increase in satiety was proportional to the change in chewing time due to internal structure.

From these experiments, it was concluded that by changing the internal structure and density of the menu using a food 3D printer, the chewing time can be changed and the feeling of fullness associated with it can be manipulated. From here, MIT's paper also proposes a user interface that automatically determines the parameters for 3D printing simply by inputting food and calories ingested as a 3D printer plug-in. 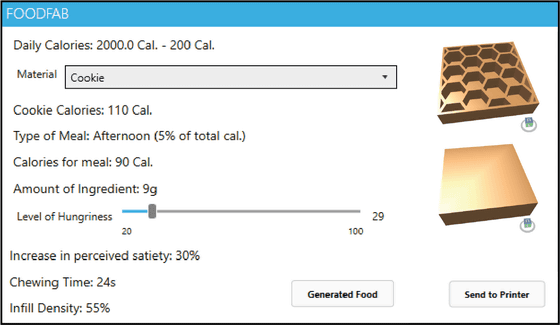 This test was only performed on cookies, so the resulting data can only be applied to foods of similar structure. Also, although the difference in structure was made by looking at multiple patterns, it was not possible to find out the point that what part of the structure affected the chewing time by digitizing each pattern, but depending on the calorie It is difficult to create a “most suitable structure” and many issues remain.