A joint research team from Switzerland, Colombia, Venezuela and Brazil has found two turtle fossils with a shell of about 3 meters in two locations in South America. The turtle's estimated weight was 1.25 tonnes, and the male was found to have horns.

Of the two fossils, the one excavated near Urumaco in Venezuela is as follows. Its size is obvious at a glance compared to a person lying next to him. Stupendemys, which lived from the Cenozoic Miocene to the Pliocene . The fossil of Stupendemys geographicus was found in the past, but the shell of the excavated individual this time reached almost 3 meters, rewriting the record so far, and even the lower jaw remained, so progressed to the same kind of research It is thought to bring about.

According to the research team Edwin Cadena about the size of the fossils discovered this time, 'The largest individual of this kind is the same size as a sedan car , including the head, neck, shell, limbs.' According to estimates, it is about 4 meters long and weighs 1.25 tons. 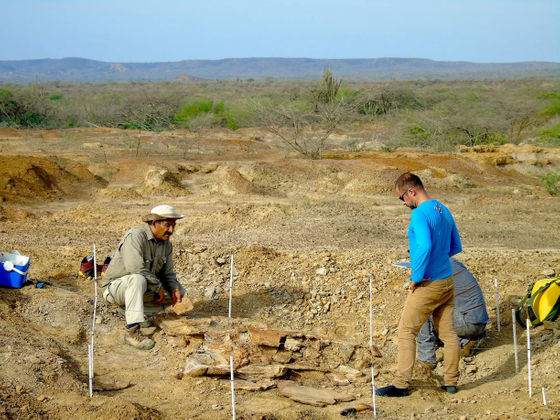 One of the fossils found near Urumaco and the fossil found in the Tatacoa Desert, Colombia, had a sturdy horn facing the front near the neck of the shell, while the other lacked a horn. The research team said that the surviving turtles may have fossilized horned fossils due to the presence of species that fight among male tortoises, which may have been used to skew opponents using these horns. I am.

As a result of the study, Stupendemys geographicus ate not only animals such as fish, crocodile and snakes, but also mollusks, fruits and seeds. Anatomical features obtained from the fossils seem to indicate that they lived at the bottom of freshwater bodies such as lakes and rivers. The genus Stupendemys is presumed to have inhabited a huge swamp spanning Colombia, Venezuela, Brazil and Peru before the formation of the Amazon and

Despite this hugeness, it is suggested that Stupendemys geographicus had natural enemies. Bites and holes, and about 5 cm of crocodile teeth are embedded in the shell found, and the giant crocodile Pulussaurus that is thought to have reached 10 m in length inhabiting the same area at the same time is this The research team looks to have left a mark. The following image shows the fossils of the existing Pulussaurus head. In addition, it is said that Archelon, which was said to have inhabited in the late Cretaceous , has reached a total length of about 4 meters and weighed about 2 tons, and is considered to be larger than Stupendemys geographicus.