A speed test alone is not enough to build a comfortable Wi-Fi environment, tools are available for detailed verification Wi-Fi routers that provide wireless LAN environments for smartphones and PCs have become indispensable for using the Internet. In selecting such a Wi-Fi router, the Wi-Fi test results published by the media are helpful, but many Wi-Fi tests use `` fastest line speed '' as the performance of the tested environment Isn't enough to know the comfort of a Wi-Fi environment, says

How Ars tests Wi-Fi gear (and you can, too) | Ars Technica
https://arstechnica.com/gadgets/2020/01/how-ars-tests-wi-fi-gear-and-you-can-too/

When actually browsing the Web using Wi-Fi, the degree of comfort depends not on the speed of the line itself, but on the response time of the application to communicate. When browsing a website, browsers make hundreds of requests, one of which is slow to respond affects the entire web browsing. In the real world, it is conceivable to browse websites while watching videos on video distribution services such as Netflix and YouTube, or connect multiple terminals to one Wi-Fi router, in which case the line speed Not only is the processing power of the router important.

Wi-Fi terminals adopt a communication standard called CCA , which stops packet exchange when detecting radio waves with a certain strength or higher to avoid interference between multiple terminals. However, CCA is a standard for avoiding interference, there is no function to select the optimal band, and as long as terminals that have avoided interference with CCA try to communicate in the same band, interference will be unavoidable. In data exchange using radio waves, a technique called phase modulation , which replaces digital data with a form that can be expressed by radio waves, is used. A simple replacement method is more resistant to noise, but less information can be transmitted. In actual communication, the communication speed is also affected by these CCA and phase modulation methods, and it is seldom possible to communicate at the maximum communication rate described in the specifications of Wi-Fi terminals. 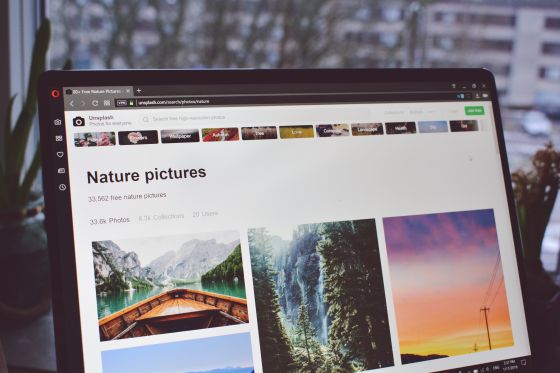 To build a comfortable Wi-Fi environment, the construction of mesh Wi-Fi is effective. If the station is placed in the middle of a place where the radio wave condition is bad and the router, the influence of noise is reduced and a modulation method with high transmission performance can be used, so that the amount of data that can be transmitted and received at one time can be increased. In addition, mesh Wi-Fi may have a function to assign a different channel to each terminal, and radio interference does not occur, so there is no need to stop packet switching due to CCA.

Jim says that Wi-Fi testing should reflect complex conditions such as network usage and phase modulation schemes that have been discussed. In order to test the Wi-Fi communication speed determined by various factors, it is necessary to work according to reality and apply a realistic load to the network, and Ars Technica uses it to apply such load Test tools are open sourced.

GitHub-jimsalterjrs / network-testing: This is a small collection of GPLv3-licensed tools to assist an intrepid researcher in testing the performance of networks, wired or wireless.
https://github.com/jimsalterjrs/network-testing

The results of tests using actual tools are also available. The floor plan of the tested building looks like this. It is about 3500 feet wide, with the ground floor on the left and the basement on the right.

Plume ', 3 ' Amazon Eero ' and 2 ' Google Nest Wifi '. First of all, if you look at the download speed of 1 MB file on each station alone, you can see that Nest Wifi boasts high performance in the kitchen, but the speed is extremely slow in the basement bedroom. 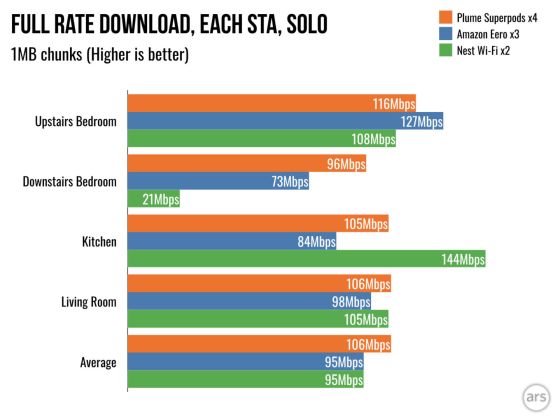 Then start up all stations and download the same 1MB file, which results in Plume's speed being very fast in every room. 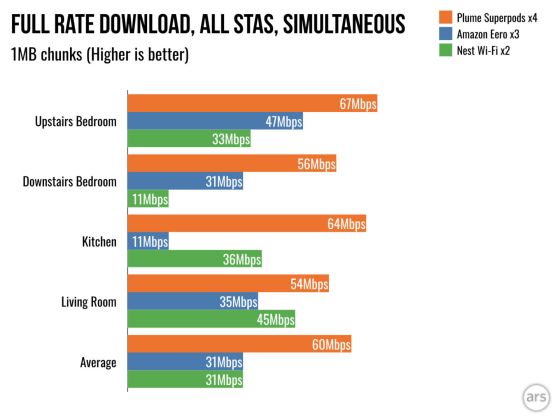 Now try streaming a 1080p movie. The movie streaming itself doesn't have much difference in the result ... 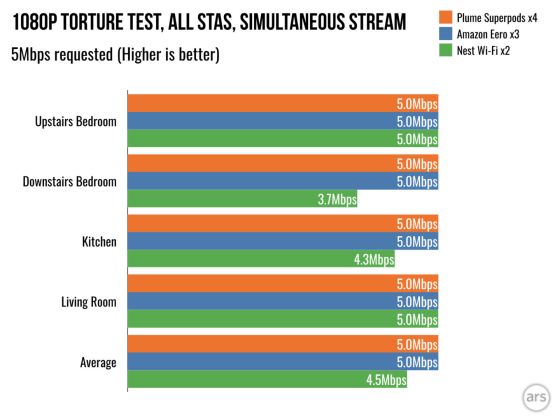 When browsing the web while streaming the movie and looking at the delay of the movie, Nest Wifi is significantly behind the other two terminals, it is important to test not only a simple speed test but also various situations I understand. 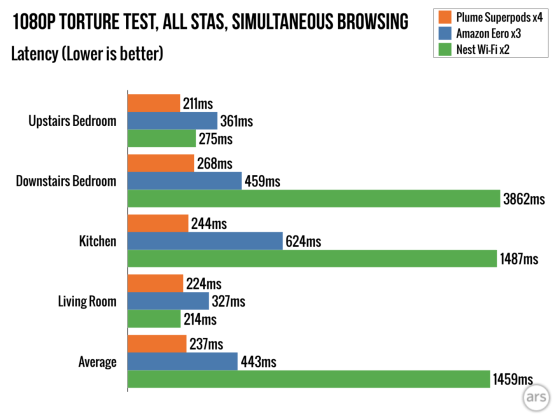