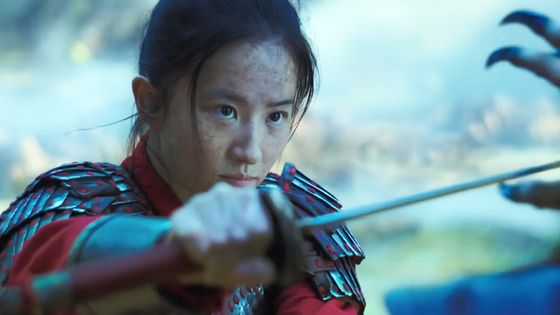 Mulan '' released in 1998 is an animated film modeled on the Chinese legend `` Hanran Ran '', a Chinese legend that a single girl served on behalf of her sick father and invested in various battles to win is. The latest trailer of the live-action version of ' Mulan ', a live-action version of the popular Mulan, a work that became the main character of an Asian woman in Disney's anime history, has been released.


The head of the fa family, Fa Zoo (act: Zhi Ma ) has a strict personality that respects the rules of the house.

On the other hand, her daughter Fa Mulan (act:

He has an active personality who likes to ride in the field on a horse.

“Your job is to bring honor to your family,” Zou tells Moulin.

In the meantime, the army dressed in armor comes to the town where the Moulins live by tapping the drum.

The decorated Mulan has an uneasy expression.

The military person who called out to the people!

Explains that this country is being invaded by northern ethnic groups.

The leader is Bolly Khan (act:

Khan is fighting and invading with a witch called Shen Lan (act:

An orchid that fights by changing the tip of the hand to the leg of a bird.

The emperor (acted by

Jet Lee ) in response to the invasion of different ethnic groups ...

“Send one man from every house as a soldier and contribute to the country”.

Zoo, who has no son, decides to join the battle as a soldier, but ...

Zoo, whose health condition is unpredictable, falls down in front of the soldiers.

Moulins who are angry.

But still Zoo doesn't give up being a soldier ...

However, the hand holding the sword is trembling and it is clear that it is difficult to fight as a soldier.

Mulan sheds tears as he feels that his father will not come back at the end.

Mulan picks up the sword ...

I am determined to be a soldier instead of my father.

“It is my duty to protect my family,” Mulan murmurs in his heart.

Mulan rides a horse as a man and leaves the house secretly to his family.

The family that was left behind was anxious.

Zoo offered prayers to his ancestors to protect Mulan.

Mulan is confused with soldiers from all over the world.

The general of Shan, who was assigned to the Mulan, was asked by Mr. Shan (actor:

I flew away as a bird. It seems to be able to turn into a bird.

Mulan grew up under a general ...

Go through the deadline.

Mulan finally got a chance to fight directly with the run ...

Ran leaves the ominous words, 'When they know your identity, they will not show mercy.'

'It brings honor to all of us'