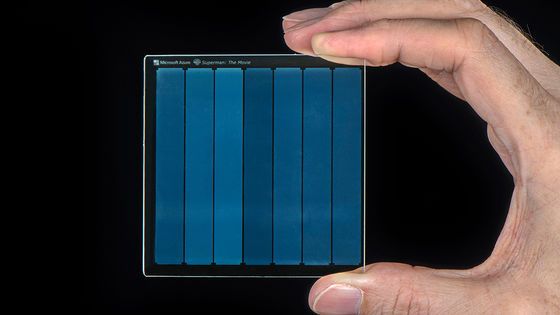 Microsoft, in collaboration with movie distributor Warner Bros., announced that it has successfully saved the 1978 movie “

Superman ” on a small glass plate . It was carried out as part of “ Project Silica ” which uses laser and AI to store data in quartz glass, and is expected as a more durable archiving method.

Project Silica is a Microsoft project that fundamentally rethinks the construction and technology of storage systems with the goal of storing more than 100 zettabytes of data in the cloud by 2023.

Books and traditional optical media can be severely damaged by flooding or fire, precious historical records can be lost. In addition, hard disks used in cloud services are consumed in 3 to 5 years, and magnetic tapes are consumed in 5 to 7 years. Therefore, it is necessary to replace them regularly, and the maintenance cost is enormous.

The storage technology being studied by Project Silica is that the femtosecond laser encodes data into the glass by creating nanoscale cubic layers at different depths and angles inside hard quartz glass. And it seems that data can be read by decoding images and patterns created by transmitting polarized light through glass with AI. Since the archive medium is made of glass, it is resistant to heat and water and will not be lost by strong magnetic force. In addition, Microsoft claims that writing data to glass is instantaneous and does not degrade, leading to lower costs for cloud services.

At Warner Bros., film is separated into three primary colors, cyan, magenta and yellow, which are then baked into a

negative film , which is then stored in a huge refrigerator-like storage. However, this method is very costly and there are only a handful of film laboratories in the world capable of this process. Therefore, Warner Bros. is considering adopting Project Silica. Therefore, as a proof-of-concept experiment of Project Silica, Microsoft saved Superman's film data with a file size of 75.6 GB on a palm-sized quartz glass plate of 75 mm x 75 mm x 2 mm. And he seems to have succeeded in re-reading Superman film data from the glass plate storage. 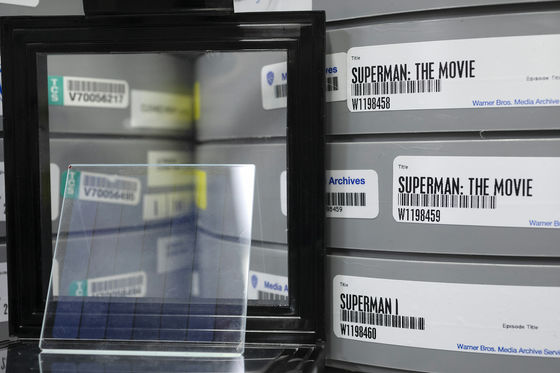 In addition, Microsoft seems to have done an endurance test such as baking a glass plate with steel wool, boiling in hot water, putting it in a microwave oven, immersing it in water, pressing a strong magnet, polishing it, etc. There was no loss at all. “We are not trying to create something that can be placed at home or playing video. Project Silica for building cloud-scale storage,” said Ant Lowestron, deputy director of Microsoft Research. “The glass storage technology developed by Project Silica is for industrial use only and is not intended for widespread use in the home.