What was the “world's first banner ad” that appeared 25 years ago? 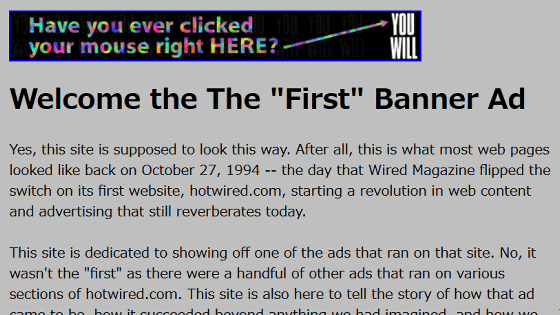 It is no exaggeration to say that

The world's first banner ad was published by AT & T , a major telecommunications company, in HotWired , a web magazine launched in 1994. The website ' The First Banner Ad ' reproduces one of the banner advertisements that were actually published at that time. Click on the banner ad displayed at the top of the top page of 'The First Banner Ad' that says 'Have you ever clicked your mouse right HERE?' Then ... 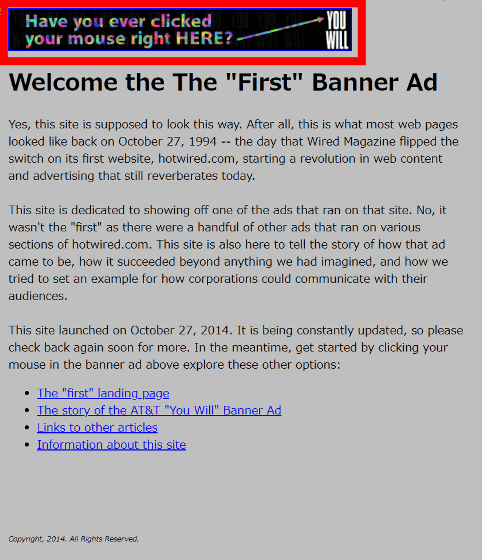 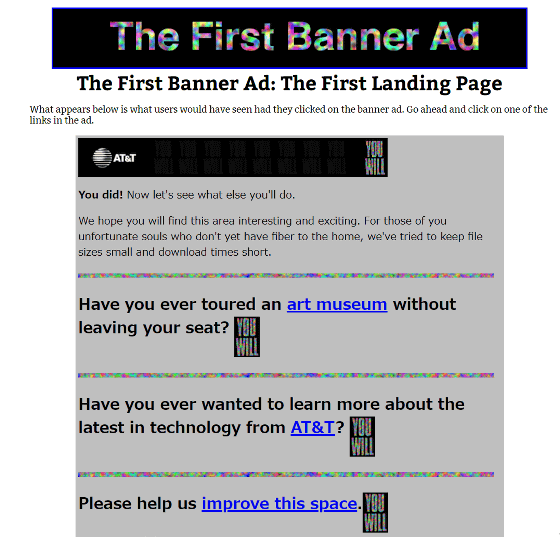 There were a few more links on the simple page. Click the link that says 'Have you ever toured an art museum without leaving your seat?' 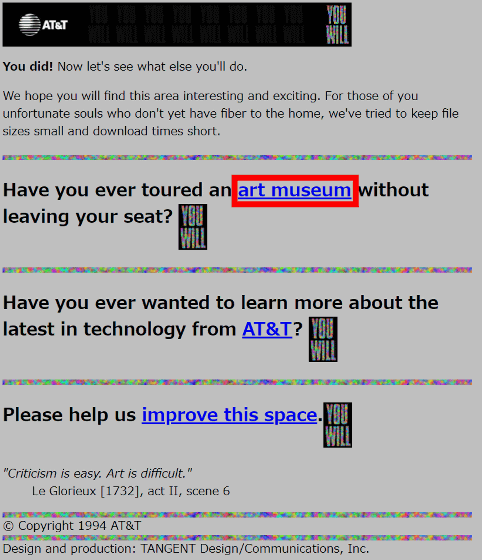 Then, the world map was displayed, and the names of museums such as America and Europe were displayed. At the time when the banner ads were posted, it seems that clicking on the name of each museum moved to the appropriate website, but many of those sites are already inaccessible at the time of article creation. However, to reproduce the banner ad, the

Orsay Museum in Paris, France, restored the website that was published in 1994. Click on the world map ... 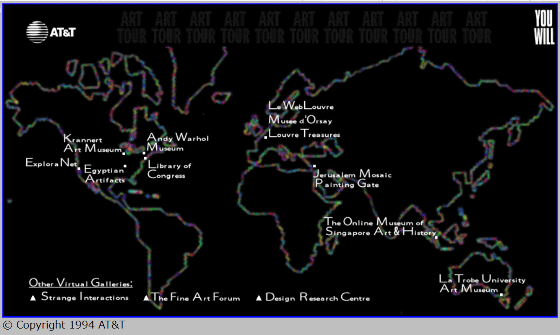 A reproduction of the top page of the official website of the Orsay Museum, published in 1994, was displayed. On the official website, the location, telephone number, opening hours, admission, information on the exhibition that was held at that time, and some of the paintings held at the time were disclosed as images. 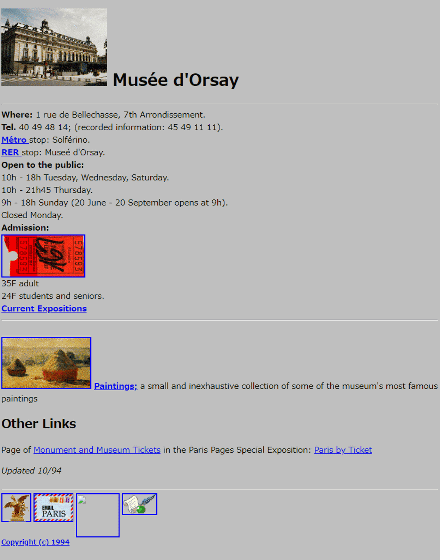 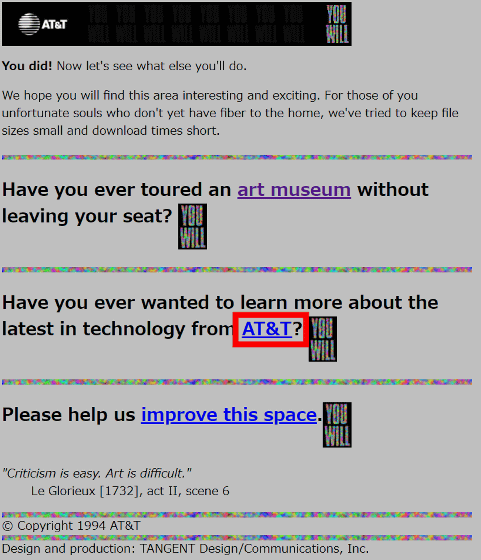 At the time of banner ad insertion, links to various contents prepared on AT & T's website were displayed on the landing page. Although the contents cannot be accessed at the time of writing the article, the website of

Bell Lab , established as an independent business of AT & T, the website of JENS SpinNet , an Internet service provider developed in Japan, You can see that it was prepared as a further link. 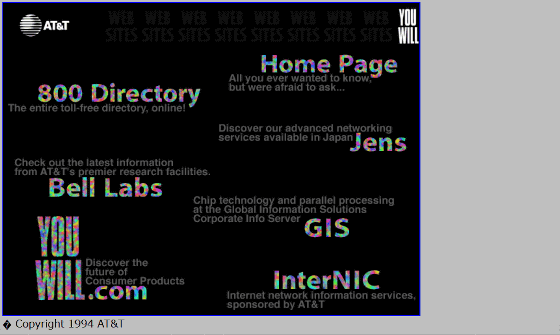 Click on the link marked “Please help us improve this space.” ... 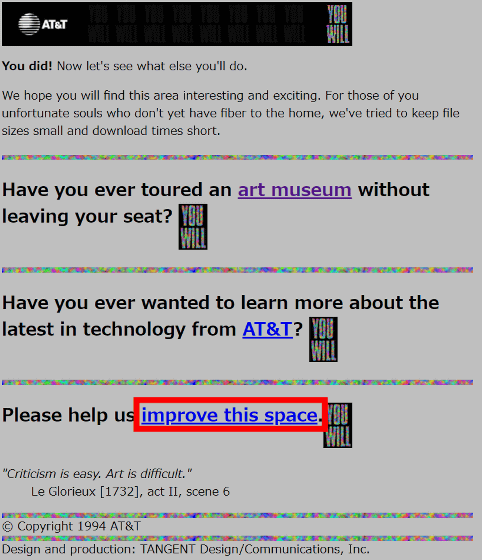 A survey response page for AT & T who clicked on a banner ad was displayed. AT & T, who was preparing a banner ad, faced the problem of 'I don't know what the user clicked on the banner ad.' As a result, it seems that they decided to collect user information in a way that can be called a super-direct attack method. Contents that can be answered include items such as the user's email address, name, and address. 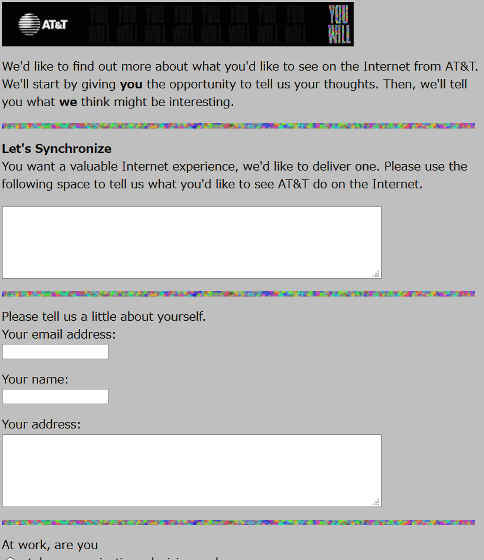 There were some questionnaires related to AT & T's outlook, such as the demand for translation services that send messages to people who do not speak through the web. 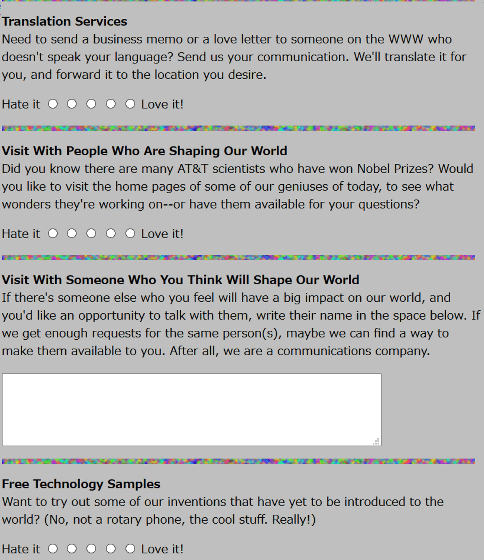 The initial banner ads were very simple due to problems such as the user's line speed. Also, the distance between users and service providers seems to have been quite different from the recent years. Since we were able to aggregate information such as how many users saw banner ads and how many users clicked on them, the number of banner ads increased rapidly after AT & T's banner ads were posted.