A battery cell that can handle a charging cycle that can travel 1.6 million km can be found 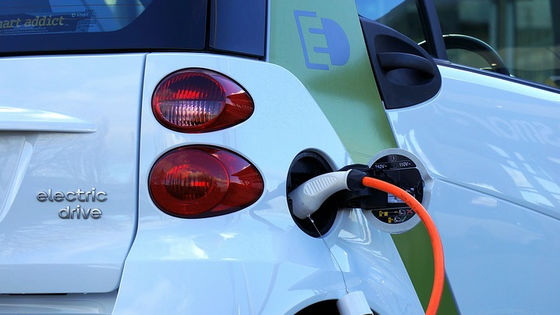 Tesla's battery research team has published a paper on batteries that can run 1.6 million km even in a cycle that shortens the battery life of 'use up and recharge'.

A Wide Range of Testing Results on an Excellent Lithium-Ion Cell Chemistry to be used as Benchmarks for New Battery Technologies
http://dx.doi.org/10.1149/2.0981913jes Most gasoline cars owned by ordinary American households run from 0 to 80 km a day, with an average of 52 km. On the other hand, although the cruising range of electric vehicles (EVs) was initially 100km, it has been improved so that it is not uncommon for 300km to 400km, and can meet the demand of ordinary households.

On the other hand, taxis and long-distance trucks run around with their batteries exhausted and recharged.

Jeff Dern and others, who are conducting Tesla battery research, have tested lithium-ion batteries with various combinations of positive electrode, negative electrode, and electrolyte under multiple conditions. As a result, we discovered that the LiNi₀.₅ Mn₀.₃ Co₀.₂O₂ (NMC532) / AG cell has a long life even at a cycle of 100% DOD.

In the graph below, the horizontal is the number of charge cycles, and the vertical is the charge capacity available. If we compare the green and purple lines in this test with the black that shows the results when using a conventional battery with a 100% DOD cycle, we can see that the degradation is very slow. Even in an environment of 40 ° C (green), 4000 cycles and 20 ° C (purple) assuming Tesla's active cooling system, the number of cycles reaches 6000. 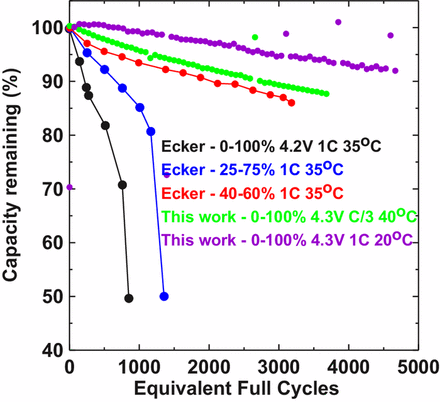 According to Dahn et al., This type of cell has a battery life of 1.6 million km. When used for grid energy storage, it seems to be usable for at least 20 years.