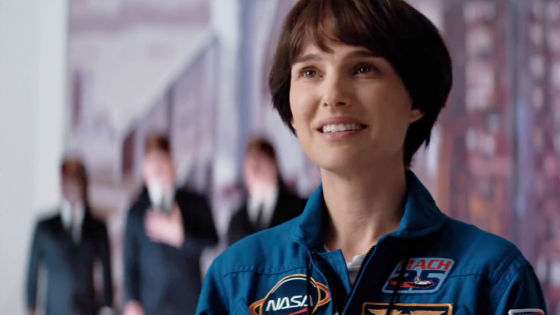 Although participating in the space shuttle mission as a NASA astronaut, the movie `` LUCY IN THE SKY '' was based on the true story of

Lisa Nowak who was arrested by buying air guns, knives, hammers, rubber tubes, etc. 'The trailer has been released. Starring Natalie Portman from the ' Black Swan ' and ' Star Wars ' series.


'Lucy, it's time to return,' the spaceship sent me instructions ...

“A little more”, Lucy is fascinated by the beauty of the earth that spreads in front of her.

“I literally saw my home and my life from the universe.”

In the video that flows with the words, the aspect ratio of the screen changes rapidly. You can see that the time goes back from the present to the past.

Lucy is an excellent astronaut and has a peaceful life, supported by her family.

My husband is proud of Lucy and has a good relationship.

Michael Collins ?” Lucy receives counseling before her mission in space.

“Of course, it ’s a pilot who gave Apollo 11 a command to Neil Armstrong.”

“Michael went out of the sailors and went around the moon for an hour and wrote in the spacecraft,“ I ’m a real man. There are no creatures around. ”

With these words as a starting point, Lucy can't leave the universe.

I don't have a heart even with my family.

All about the universe in my head.

We will continue to make efforts to go to space.

Although I am married, as a person who aims for the universe together, the distance from Mark will approach.

Your boss can accuse you of not receiving counseling.

Lucy complains that she is doing everything in her mission.

'There is a contradiction in Lucy, it may be difficult to complete the mission' is written.

Lucy finds an unexpected email and is shocked.

There are scenes where you lose your mind during training.

My relationship with Mark will deepen ...

From one point, Mark begins to think that she has a relationship with another woman.

Buy a hammer or scissors.

'What are you doing?'

Lucy finally puts on a blonde wig and implements a plan to kidnap foes.

LUCY IN THE SKY is scheduled to be released nationwide on October 4, 2019, and the release date in Japan is undecided.