This is how you map a map with all the planets in the solar system and 18,000 asteroids 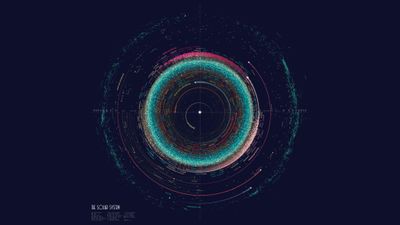 In addition to planets such as Earth and Mars, there are many asteroids in the solar system. A map of such a solar system planet and 18,000 asteroids, along with their orbits, is available.

An Orbit Map of the Solar System

It is Eleanor Ritz, a Ph.D. student at the University of Washington, who mapped 18,000 asteroids, large and small, together with the planets of the solar system. Mr. Ritz's major is neurobiology for mosquitoes, but 'sometimes it becomes a science designer and data nerd,' he said.

Such Ritz collects all the data of the planet that NASA is open to the public , about 10,000 asteroids with a diameter of 10 km or more, and nearly 8,000 celestial objects whose size has not been confirmed. We mapped with each orbit and made a map of the solar system as of December 31, 1999.

The following image is the map. When you click on the image, it will be displayed in its original size. This is the place I expanded around the sun. The Earth (THE EARTH) is on the upper side of the image, and Mars (MARS) is on the outside slightly, and Venus (VENUS) and Mercury (MERCURY) are on the inside in the order of the orbits closer to the Earth. Also, Jupiter (JUPITER) is on the right above the asteroid belt, which looks like a blue cloud. Although this map depicts orbits centered on the sun, NASA's database can also output orbit data from a point other than the sun.

For example, this image shows 'the orbit drawn by each planet of the solar system seen from the earth', and represents Mercury, Venus, Mars, Jupiter, Saturn, Uranus sequentially from the left. When we see the orbits of these planets draw a geometric pattern, the ancient Greeks who do not know the geodynamics move these planets, which are clearly different from the stars of distant galaxies, “Planetes (wanderers) I understand well why I called.

What Mr. Ritz mentioned as 'a personally surprised place' is the positional relationship between Neptune (NEPTUNE) and Pluto (PLUTO) on the left of the image. As of 2019 Pluto is considered '

not a planet ', but in 1999 it was considered the ninth planet of the solar system. What surprised Ritz was that Pluto was inside the blue arc that represents Neptune's orbit.

This is because Pluto's orbit is special, and it may temporarily enter the inside of Neptune's orbit. Specifically, Pluto's orbit has been inside the Neptune's orbit from 1979, and 1999 was just the timing when this orbit intersects. Mr. Ritz, who did not know this, said that he had struggled for a long time looking for a bug in the program that outputs orbits until he knew that this map was correct.