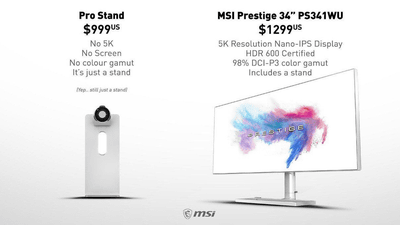 MSI's 34-inch Prestige is on sale in 2020, but of course the performance is quite different from Apple's 6K resolution, 32-inch Pro Display XDR. For example, David Bernard, founder of application development company Contrast, rated that '34-inch Presitge of MSI might be Ali as an alternative to Pro Display XDR, but it was not.' The

Giant bezels, cheap plastic everywhere, no cable management, etc. Their marketing shot is so misleading. (I was genuinely from the I've heard, the Pro Display XDR is even more beautiful.) thinking it might be a decent alternative ... ????) https://t.co/WxOsWaVJ6j pic.twitter.com/WBSNRornxE

Still, 9to5Mac speculates that MSI advertising may stick to a layer that says 'I want to use a display that is cheaper than Pro Display XDR and that has higher performance than general models.' 'Apple would have been able to avoid this backlash if it announced it for $ 6000, including the stand in the Pro Display XDR.'