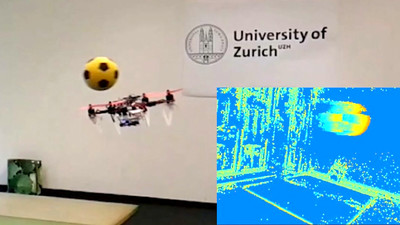 It is a drone that has made remarkable progress with technological advances, but it is very difficult to quickly avoid objects that fly at high speed, such as flying birds and balls. A research team

at the University of Zurich has developed a technology to recognize objects flying by cameras and automatically avoid them, and has actually released an experimental movie by drone using this technology.

How Fast is Too Fast? The Role of Perception Latency in High-Speed Sense and Avoid
(PDF file) http://rpg.ifi.uzh.ch/docs/RAL19_Falanga.pdf

You can see in a single shot the following movie to see how the drone actually turns the ball. 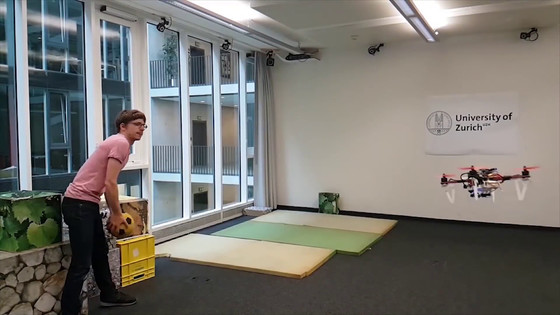 However, changing its trajectory, the drone will avoid the ball brilliantly. In the image of the camera mounted on the drone, only the ball flying towards the drone is recognized. Throwing the ball towards the fixed drone ...... You can see that we are firmly aware of the coming ball at tremendous speed. According to Dr. Davide Falanga, a researcher at the University of Zurich, it is almost impossible for a commercial drone to have the ability to quickly avoid moving objects. For example, the following movie is a drone filming an event held in Russia, but it shows the moment when one of the participants thought that it suddenly throws a whistle towards the drone . Of course, the drone can not even dispel the axe and will be knocked out.


The researchers say that the reason why the drone can not be automatically avoided in this way is that the response speed of the drone's motor and the latency of sensors cause bottlenecks. Avoiding flying balls is easy for humans, but it is a difficult skill for electronics.

The drone that the University of Zurich used for experiments is equipped with a sensor called ' event camera ' that is inspired from the retina of a living being. Ordinary cameras shoot 30 to 60 images continuously per second, but event cameras only capture changes in the brightness of the object, so less data can be achieved and bottlenecks can be resolved. I mean. 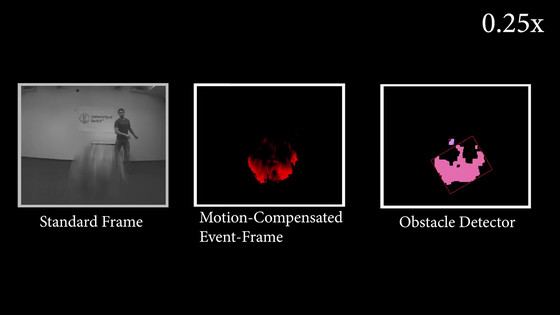 Event cameras under development are not yet common, and so expensive and expensive. Therefore, although the drone equipped with the automatic avoidance function by the event camera is still in the laboratory stage, it can be expected that it will be possible for the drone to autonomously avoid flying balls and boats if realized. 'It will eventually be adopted as a standard feature on commercial drone,' said Falanga.