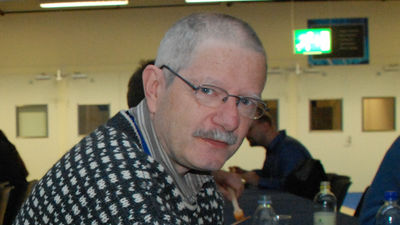 It is known that computer scientist and programmer Joe Armstrong (Joseph Leslie Armstrong), who is known as a parent of the functional programming language ' Erlang ', died on Saturday, April 20, 2019. I was 68 years old.

RIP @ joeerl , thank you for inspiring it is great sadness that I share news of Joe Armstrong's passing away earlier today. Whilst he may no longer be with us, his work has laid the foundation which will be used by generations to come. all.

Armstrong was born in 1950 and is from Bournemouth , Dorset town in southern England.

When I was 17 years old, I learned about FORTRAN on a mainframe that would have been IBM's being introduced to school. Taking advantage of this experience, he was majoring in physics at the time of University College London, and was in the process of debugging his classmate's program in exchange for beer.

Armstrong developed the programming language 'Erlang' with Robert Verding and Mike Williams in 1986, while at the Ericsson Computer Science Laboratory. The goal of Erlang development was to improve the development of telephony applications.

In 1995, a joint project ' AX-N ' was developed for new switch development by Ericsson and the Swedish telecommunications company Televerket. As a new exchange, a project of 'AXD' was launched, the hardware part succeeded AX-N, and 'Erlang' was adopted as a development language. AXD 301, which contains over 1 million lines of code from Erlang, was released in 1998.


But this year, Ericsson decided not to use Erlang for new products in the future, for 'preferring non-exclusive languages'. Armstrong left the company, and at the end of 1998 Erlang was open sourced.

Armstrong has left a statement saying, 'Why is object orientation fucking?'

There are several translated sentences, so please refer to them.

Continuum Hypothesis: Why Object-Oriented is Fucking by Joe Armstrong-Translate for Free
http://chypot.blogspot.com/2012/08/by-joe-armstrong.html