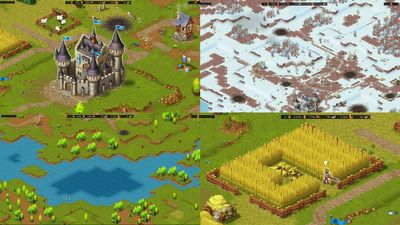 A simulation game " Townsmen " that creates a town together with residents as a lord of a medieval European-style town has been distributed since January 24, 2019 for Nintendo Switch. "Townsmen" not only arranges roads and buildings but also real-time watching the people living in the town become mini-characters, walking around the town, living while working or enjoying drinks I was able to develop my own city, so I tried to play it. If you look at the following movie, you can see what game "Townsmen" is played in one shot.


Starting from the game starts with a tutorial. The player became the owner of a small village and decided to undertake the reconstruction of the village. The first job is to build a house where people live to increase manpower. Press the X button to open the "Build menu" and select "Home". Choose a place you like and set up a house. Even if you choose a place to build a house, you just have a hole that is the foundation of the house, so that the house does not build suddenly. A villager who held a luggage came out from the castle which is the base of the town ... ... I arrive at the construction site and start working at the scoop. Soon the house was completed. The work of the villagers is not just to build a house. In order to procure timber for building buildings, it is necessary for the villagers to become a lumber and to cut wood. We select the lumber house near the forest in the town and arrange the villagers. Then, the villager who was doing another work until now ... ...

Transform into a lumber. I began cutting trees. In this way, it is one of the tasks of the lord to allocate work to each villager. Since we can not use wood alone, we want to make a sawmill. The sawmill is a place I want to build near the lumber house, considering the efficiency of carrying wood, but stumps etc are scattered near the lumberhouse. So remove the obstacles in delete mode ... Establish a sawmill. In this way, the goods that the building produces are also linked to the products of another building, so it is a good idea to develop the town systematically while balancing the type and number of buildings and their positional relationship This is the basic flow of this game. So, I decided to advance the game and develop the town. The movie below is where the villagers are actively looking at the living while doing various work.

Lifestyle observation of the villagers' life with "Townsmen" - YouTube


In the workplace of the villagers there are wheat fields in addition to lumber houses ...... And there is a baker who bakes bread from wheat. In this way, goods are not merely parameters, but they are organically linked to the cycle of actually producing, transporting to another place, processing, and consuming. When observing the villagers closely, not only are they coming and going through the workplace but also enjoying chatting in the square of the town. In the game, there is not only a story mode in which quests are performed to solve various problems while developing the town, but also a sandbox mode. For example, a map that develops a valley that becomes a key hub of traffic into a commercial city ... ... Not only the topography but also scenes of war remains Snow and situations such as rebuilding the village buried in debris. In "Townsmen", villagers have their own homes, workplaces and their favorite entertainment, so they are characterized by the ability to dynamically develop the town while observing them. It seems that the villagers are living in mini-characters, so if the township is settled down, they will rest their hands and try looking at their lives.

Meanwhile, since a myriad of elements are complicatedly intertwined, if logistics is delayed due to disasters or robbery of thieves, it is also possible that the logistics are lacking in the chain and manuals and supplies are lost. In order to be a name owner, it is a game that makes people who are familiar with urban planning simulation a rewarding game, as they are required to develop precise planning and respond to unexpected situations, and more attentive attention. 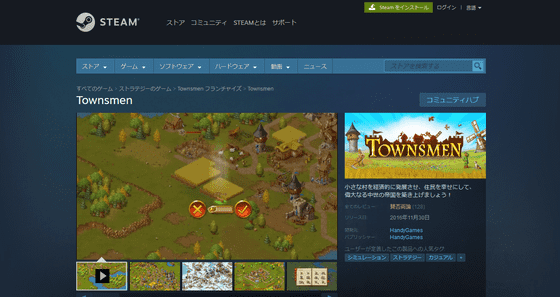