A huge 'pigeon tower' where 10,000 pigeons live in has supported mankind's agriculture for thousands of years 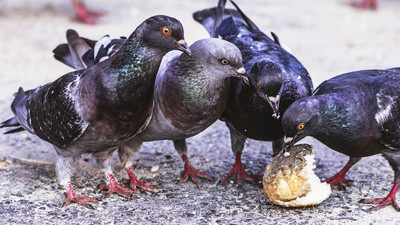 It is said that human beings started agricultural production about 10,000 to 20,000 years ago, according to one the Middle East from Israel to Iran now is regarded as the origin. No Tech Magazine of overseas media introduces the " pigeon tower " which existed in such Iran and is said to have been an important facility supporting agriculture before modernization.

In modern science, it is known that nitrogen, phosphoric acid, and potassium are important factors as fertilizer to raise the productivity of agricultural crops. In particular, the Harbor-Bosch method, which can produce chemical fertilizers from hydrogen and nitrogen in the air, is said to be "a way to make bread from water, coal and air", and it is said that the agriculture since modernization has largely changed. The pigeon tower is about 10-15 m tall. The basic design is simple, taking the shape of a hollow cylinder surrounded by pillars made of mud bricks. There are innumerable nest holes in the pillar, and depending on the tower it is possible to accommodate up to 10,000 birds. There is only one hole at the top to allow pigeons to enter and leave the tower, which seems to be a way to prevent snake, the natural enemy of the pigeon, from invading. Wild pigeons do not require such troubles as chickens and ducks, and if there is only water and a tower, they gather without permission and live in. Like a chicken pigeon and its egg can be edible as a valuable source of animal protein, and there is also the advantage of eating pests like a duck. Also, pigeon feces seems to have been used also for the manufacture of gunpowder as well as fertilizer.

Furthermore, the advantage of the pigeon tower is not only that you can efficiently obtain organic fertilizer materials, but also low maintenance. Management of the tower is only a shovel to harvest feces and a brick to repair, the maintenance cycle is also in hundreds of years. Over the centuries pigeons have played an important role in the political economy of Iran. In Iran, where agriculture has been taking place about 10,000 years ago, it is important to keep harvests for a long time, rather than getting big profit in a short period of time. For Iranian farmers, the pigeon tower is a necessary facility to stably supply nutritious high-quality fertilizer and it was regarded as a valuable asset for the owner of the pigeon tower to be taxed specially . 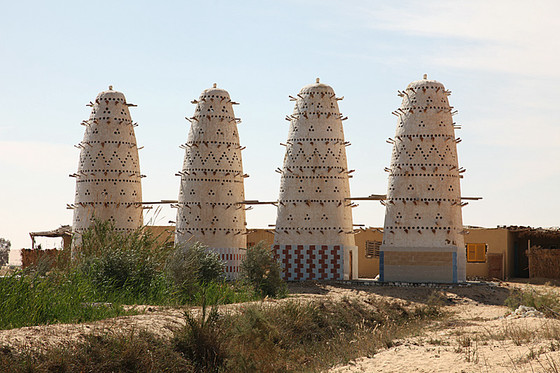 The pigeon tower has been heavily used until chemical fertilizer has spread in Iran in the 1960s. However, it seems that it is decreasing now that it is used for purposes other than procuring pigeon food ingredients. According to No Tech Magazine, the Pigeon tower is not an agricultural facility in modern times but as "a monument showing the lasting importance of low-tech solutions to the agricultural crisis".