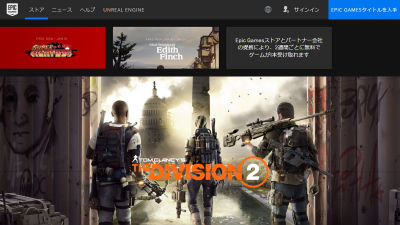 Speaking of the sales platform for PC version games, I think that many people think of " Steam " first, but Epic Games, which develops game engine Unreal Engine and popular online shooting Fort Knight , just announced in December 2018 The unique game store " Epic Games Store " is increasing its presence. The game version " The Division 2 (Division 2)" for the PS4, Xbox One, PC game released by Ubisoft on March 15, 2019, which is a game maker that handles Assassin's Creed series, Watchdogs series, Rainbow Six series etc, It is becoming a topic announcing that it will deliver the content at the Epic Games store instead of Steam.

The Division 2 will not be on Steam, but it will be on the Epic Games store? Eurogamer.net
https://www.eurogamer.net/articles/2019-01-09-the-division-2-wont-be-on-steam-but-it-will-be-on-the-epic-games-store

A dedicated page of Division 2 has already been established on the Epic Games store. 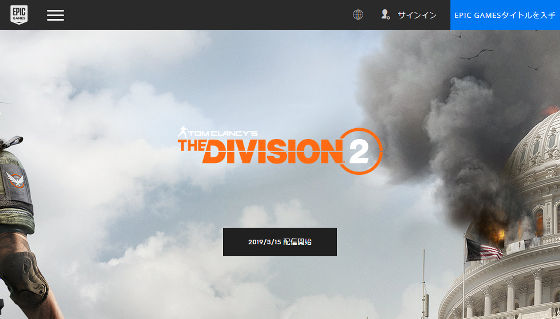 The Epic Games store announced in December 2018 became a topic as a game store that can give sales to developers rather than Steam. Since its appearance, we are working on expanding power such as distributing free games every other week, and in December 2018 signed a contract to distribute titles such as Skybound and The Walking Dead: The Final Season at the Epic Games store I will.

Even compared to past efforts, Eurogamer of overseas media wrote that concluding a distribution contract with Ubisoft is "a big progress". As popular title Division 2 is expected to record millions of sales worldwide, Eurogamer says "Valve (Steam's manager) will miss a serious amount," I write it.

Chris Early of Ubisoft said, "Epic continues to destroy the video game industry so far, their third-party digital distribution model is the best example and Ubisoft also wants to support," from Steam I will tell you the reasons for the transition to the Epic Games store.

The details of the PC version of Division 2 are summarized in the following movie.