What type of work was the cover of the 2018 animation magazine? Was the new type &amp; Animage &amp; Animedia annual cover summary While cleaning for the end of the year, one year's worth of new type · animage · animatedia came out, so what kind of work was in the 2018 animation by aligning the cover sheets, what kind of works in a magazine I tried to find out whether it was picked up.

A mountain for 1 year each of animatedia, animage, new type from the left. 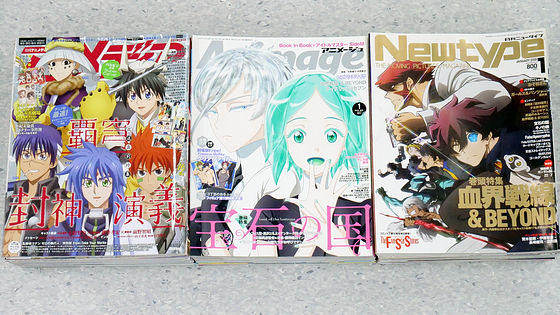 The thickness after removing the appendix and the poster being inserted is like this. The bulge varies because only an animage is bound, but there is not much difference there.

◆ Animedia: First of all, animatedia. The feature of the front cover is that the number of characters is particularly large and that the colors and patterns of the back are versatile. If it is a fancy cover that attracts eyes at bookshop animation magazine corner, there is a high possibility that it is animatedia out of three magazines. 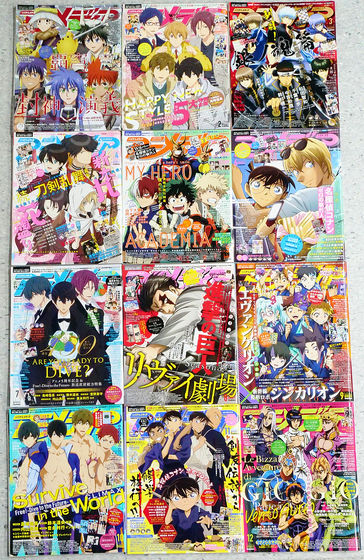 The April issue is " Continuing" Takenori Ranbu - Hanamaru - " , the May issue is" My Hero Accademia ", the June issue is the" Detective Conan Zero Enforcer " The July issue is " Free! - Dive to the Future- ", the August issue is " Advance Giant Season 3 ", the September issue is " Shinkansen Deformation Robo Sincarion " The back cover list looks something like this. In Animedia entitled "W cover", it was No. 11 in No. 12, and it had specifications with logo like the cover. In other journals, there was a case where Animage took Macross Δ for both cover and back cover in August issue, but in 2018 it was only animatedia. 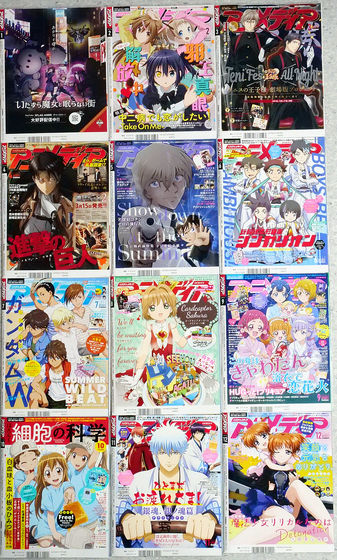 The back of the July issue is " Mobile Suit Gundam Gundam W ", the back of the August issue is " Card Captor Sakura Clear Card Edition ", and the September issue is " HUG! Pretty Cure ." It is said that Gundam W decorated the cover for the first time in 22 years, despite the back. The back cover part looks something like this. All No. 12 was released at a special fixed price, the January issue was 920 yen, the February issue, March issue, June issue was 940 yen, April issue was 950 yen, the remaining No. 7 was 980 yen. In addition, we celebrated the 450th issue in the July issue. ◆ Animageu - followed by Animage. The background color is basically a single color, but sometimes there is another pattern. Although the number of characters is rather random, in the year 2018 two people have decorated the cover six times. The April issue is " Poptip ", the May issue is " Eidish Seven ", the June issue is " Balance of Inazuma Eleven Ares " The July issue is " HUG! Pretty Cure ", the August issue is " Eidish Seven ", and the September issue is " Free! -Dive to the Future- ". It celebrated its 40th anniversary in this July issue. The back cover looks like this. " D · A · T (Daisuke Ono · Takayuki Kondo) " appeared for the third consecutive month from the August issue to the October issue. Each of the spine covers has a logo of different color every month and the name of the feature of that number. The feature name is black from January to October, but in November and December it is written in accordance with the color of the logo. ◆ New Type - The cover of the new type is basically white. In addition, although there were cases where the characters overlapped with the logo in the other two magazines, since the new type logo is arranged above the illustration, it does not overlook the name of the magazine when it is seen at the bookstore. The April issue is " Bungo Stray Dogs DEAD APPLE ", the May issue is " Card Captor Sakura Clear Card Edition ", the June issue is " Darling in the Frankis " The July issue is " The Five Star Stories ", the August issue is " Angel of Slay ", the September issue is " Fate / EXTRA Last Encore " The back cover looks like this. It is a bit surprising that " Mobile Suit Gundam NT " appeared only in this new type October issue back cover. The back cover part is like this, the number is unified in blue. The price is fixed price 800 yen, March issue - July issue · October issue · December issue is special fixed price, but it was unchanged 800 yen. It is like this when listing works. The most appearance work is "Free!" 4 times. The next three appearances are "Eidishrish Seven". Including animatedia's W cover, "Detective Conan" and "Card Captor Sakura" also appeared three times. Although there is no work decorating the cover of 3 magazines, "Card Captor Sakura" appeared in 3 magazines when including W cover. In addition, the same work was never published in the same month.