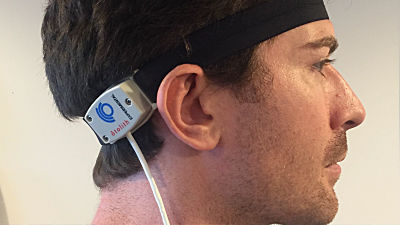 There are many people who have experienced "VR sickness" when using a VR (virtual reality) environment in recent years because of being drunk when getting into a car, ship, airplane and feeling sick. Usually, if you avoid medication by drunk medicine, you will ease symptoms, but the device " OtoTech ", which is being developed, will transmit symptoms of sickness just by transmitting vibration from the headband worn on the head It is possible to reduce it. Because there is no need to rely on drugs, attention is also gaining attention from military officials who may transport large numbers of soldiers.

This Inventor May Have Cured Motion Sickness Without Drugs. And That Could Mean a Lot to the US Military - Defense One
https://www.defenseone.com/technology/2018/11/inventor-may-have-cured-motion-sickness-without-drugs-and-could-mean-lot-us-military/152960/

OtoTech is a device developed by Otolith Labs. As shown in the picture below, we attach "bone conduction transducer" which generates vibrations behind the ears and transmits it to the nerve by bone conduction. It is a mechanism to suppress the occurrence of sickness by causing a type of "confusion" in the inner ear nerve leading from the ear to the brain by simply adding vibration with this device. The vibration added from OtoTech gives stimulation to two of the four nerves that extend from the inner ear nerve to the brain. Actually the principle that sickness is suppressed by vibration is not completely elucidated, but the basic principle is to "reduce sickness by suppressing information on the movement of the body given to the brain" It is thought that it is. The vibration applied to the nerve by OtoTech stimulates the inner ear nerve as a meaningless "non-information stimulus", and originally blocks information on the movement of the body by "overwriting" equilibrium information transmitted from the inner ear It is to suppress the occurrence of sickness. 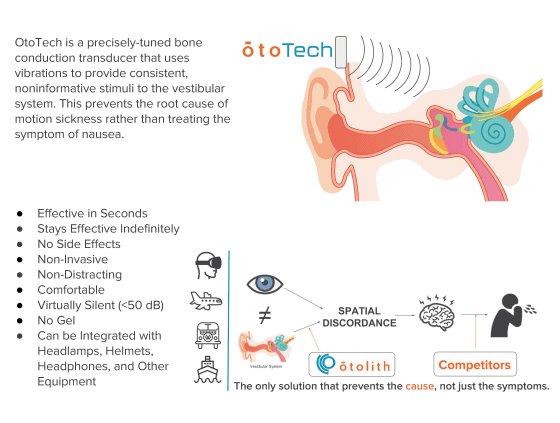 OtoTech is a fundamental approach that does not suppress the sensation of the occurrence of sickness with drugs, etc., but loses sickness itself. For those who suffer from motion sickness, OtoTech is likely to have great merit, but the US military is also interested in this device.

In a military that sometimes carries soldiers on vehicles, aircraft, ships, etc., the soldier's "drunk measures" is a big problem. Currently scopolamine- based sickness drugs are used, but this medicine has side effects of inducing drowsiness. In order to alleviate this side effect, when using sickness medicine, we take amphetamine with central excitatory action together, but this is a stressful way to drink sedative medicine and excitement medicine at the same time It is a method.

OtoTech is attracting attention as a device that can reduce sickness without being affected by such side effects. Although the prospect of practical use of OtoTech is not yet clear, it seems to be said to be a device which may bring great benefit to both the private sector and the military.