Bacteria resistant to antibiotics are discovered from the International Space Station 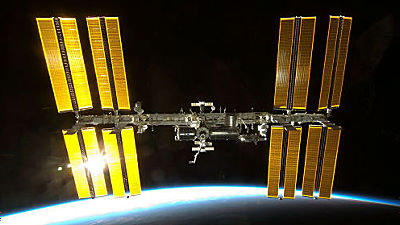 Bacteria with a resistance to antibiotics " super bug is referred to as a", the British government " might kill one person for each super bacteria 3 seconds in 2050 , such as the announced", the risk of Retribution It is unbearable. Meanwhile, bacteria resistant to antibiotics were discovered in the International Space Station (ISS) , which is in a completely different environment from the Earth, with a dense carbon dioxide concentration with microgravity.

Antibiotic-Resistant Bacteria Have Been Discovered on Board The International Space Station
https://www.sciencealert.com/microbes-on-the-iss-show-we-can-t-take-astronaut-health-for-granted

Scientists at NASA and Jet Propulsion Laboratory (JPL) discovered from ISS toilet and exercise area are strains of Enterobacter species . Enterobacter is susceptible to infection in patients in the intensive care unit with impaired immunity and has high antibiotic resistance. Strains found in ISS are not human pathogens, but it is worrying that enterobacter is present in ISS. Of course, human beings will carry bacteria anyway, so it is impossible to make the spacecraft completely clean of bacteria zero. However, an environment with little gravity, cosmic radiation and high carbon dioxide concentration also affects the growth of microorganisms. JPL researchers regularly collect samples from the ISS and analyze the bacteria to see if the bacteria are dangerous to the astronauts and equipment, but the antibiotic resistant Enterobacter This is my first time to be discovered.

Genomic analysis by researchers showed that the five Enterobacter strains found at ISS are similar to the three strains recently discovered on Earth. These three strains belong to Enterobacter bugandensis and have been reported to have been infected with newborn infants and immunocompromised patients.

Samples were collected in 2015, and astronauts reported to be infected with Enterobacter do not exist at the time of article creation. Although it is not a crisis situation at this stage, there is a possibility of causing a dangerous situation in the future. Researchers surveyed revealed that strains found in space are resistant to cefazolin, cefoxitin, oxacillin, penicillin, rifampicin. Although it is concluded that it is not a human pathogen at this stage, according to computer modeling, the possibility that the strain becomes a human pathogen and cause a disease is 79%. "Further biological experiments are necessary to determine the effects of pathogens on ISS, researchers said, elements related to the universe such as microgravity may affect pathogenicity and toxicity."