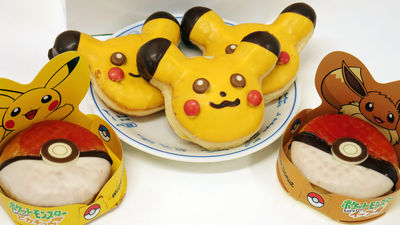 It is quite difficult to make a character's design as it is donut. Prior to sale at some stores, Mr. Donut 's "misdo Pokémon winter collection" whose design of Pikachu was a topic also appeared in the neighborhood store, so I went to buy.

Arrived at Mr. Donut. I wanted to see Pikachu lined up side by side on the shelf, but since it was before display, I could not see anything and it was about fun after I bought it. This time, I wanted lots of donuts so much, so I bought two "Let's go home with you take home!" 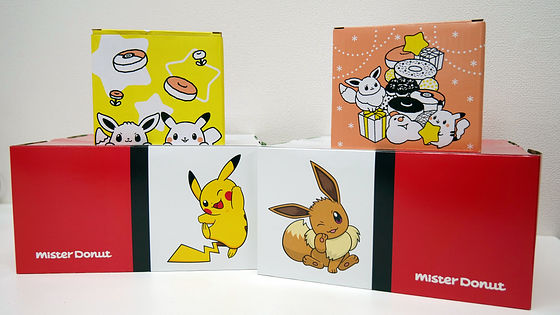 The box is an original box with a monster ball style. 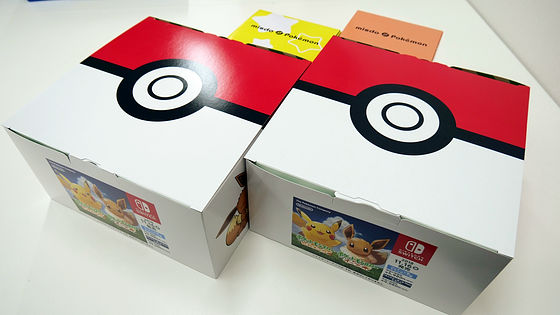 It is the size that you can put up to 4 donuts. This time, we unified it with all Pokemon Donuts, ordered three Pikachu and three Monster Balls. Pikachu 6 pieces can also be ordered. Pikachu is a round ears that can not reproduce sharp ears indeed, but reproduces the pillow eyes and red cheeks with marble chocolate. The mouth is clean and the mouth corner is rising. Although it looked like it was struggling to reproduce at the time of pre-sale, the design has become more than a certain quality because it is a sale, and the editorial staff who saw the donut once was muttering "Oh, cute". The surface is covered with banana-flavored chocolate, inside which is whipped cream. The line between the red and the white is drawn with chocolate, but it is not only the surface but the shape that cuts in two and chocolate puts two donuts together. The original mug cup is about 8.3 cm in diameter × 8.5 cm in height and is somewhat narrowed towards the bottom. Yellow is a large Pokemon painted, and the red one feels like Pokemon who received a Christmas present.