Why lots of 'pigeons' live in cities around the world? 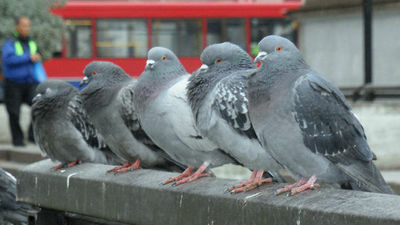 Pigeons are birds that are found everywhere in the town, and we often see sight of walking around pavement roads while swinging their heads with peculiar face and being fed in large numbers by feeding in the town square. It is no exaggeration to say that the birds are most familiar to those living in urban areas. The role played by human beings is not small as the background of pigeons breeding in large numbers in the city so far.

Why Are There So Many Pigeons?
https://www.livescience.com/63923-why-cities-have-so-many-pigeons.html

It is said that around 400 million pigeons live in the world, most of which live in urban areas. However, the pigeons found in the town did not live in the city where humans lived from the beginning, it was a wild pigeon originally called Kawarabato . Kawarabat inhabited living in arid regions such as Europe, Central Asia, North Africa, and there was a habit of living in cliff dents and the like.

About 1 about million years ago, because the people of Mesopotamia and Egypt civilization is the rock dove easy to get used to the people and the food, poultry things and began reduction. Fatty young birds are abundant in protein and fat and have become a nutrient-rich and valuable source of food for people living in the city, says Steve Portugal, who is studying the history of animals and humans.

After that, pigeon 's house decomposition continued for a long time in the Middle East and Europe, but eventually I noticed that there were methods other than using pigeons as food for pigeons. Pigeons are equipped with biological clocks, solar compasses, functions to sense geomagnetism, etc. There is a navigation function to accurately read the direction. People who learned the existence of pigeon-derived navigation functions came to use pigeon's homing instinct as a pigeon pigeon , and pigeons became useful when exchanging messages with remote areas. 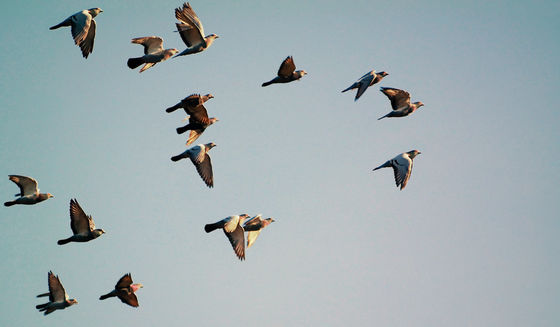 Also, pigeons that have been kept for food for many years, gradually other birds and animals became mainstream as meat. However, it was not that people lost interest in pigeons, but pigeon breeding began as a hobby.

By the year 1600, pigeons that did not inhabit in North America originally arrived on board the ship. It seems that these pigeons are more likely to have been imported for the purpose of breeding by mere enthusiasts rather than for food use. The pigeons, which had been losing their role as food, were not caught so much and started to settle in the urban areas of the U.S. along with the development of America by Europeans.

According to Elizabeth Kahlen enrolled in the doctoral course at Fordham University, the city where people live is a very easy environment for pigeons to live. "For a pigeon who lives on a cliff or the like, a tall building should be felt as if it is a natural cliff, as well as a veranda, a bay window, air conditioning unit protruding from a building, etc. as well as a gap formed on a cliff , The environment is perfect for the nest for the pigeon to live, "Karen said. The pigeons adapted to the city are not only buildings, but also the reason for the pigeon's eating habits. Many birds tend to prefer certain ingredients such as fruits and insects, but pigeons can eat anything if food trash that human beings throw away. According to Portugal, "Pigeons are the ultimate all-rounder if other birds are experts for a specific food," he said, making it hard to imagine a situation where pigeons are starving in urban areas.

Also, when pigeons cultivate chicks it is not the food they have captured from somewhere, but the pigeons , milk, which spat out the victims softened the food they had eaten. Pigeon · milk is a product made by softening the part of the food that the parent's pigeon had stored in the throat bag for a while, and the content of protein and fat is very high. Even foods that can be made for Pigeon milk will not starve if the parents are eaten.

These traits are very advantageous for living in cities and are far superior to other birds. In addition, the pigeon can lay as many as 10 chicks in a year, combining the benefits of survival favorable traits and prolific species, so far it has come to breed in the city. Pigeon's shit has an action to promote metal corrosion, and pigeons propagate in Hun and cause diseases such as cryptococcosis, so pigeons are called "wings with wings" It is sometimes seen. The damage of the landscape caused by hunger is often a problem, and the cost to keep the town clean also by the pigeon's settlement will jump. Nonetheless, Mr. Portugal said, "A pigeon is one of the few wildlife that can be observed daily by people living in urban areas and there are many things you can learn from the pigeon who perfectly adapted to the environment" He also said that there are advantages.