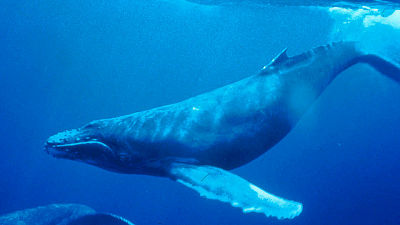 When you play YouTube with subtitles you often find that captions such as "applause" and "cheers" are displayed. This is what the human staff does not input by human input, but let's judge what kind of sound by letting AI using convolution neural network analyze the voice included in the movie. The AI ​​that Google is developing is progressing to be able to judge the contents of environmental sounds that are not voice, but now this technology is now being used to protect natural animals such as humpback whales I will.

As part of Google's AI related program " AI for Social Good " that sets the target of "AI for society", Google is part of the National Oceanic and Atmospheric Administration (NOAA) "Pacific Islands Fisheries Science Center (PIFSC: Pacific Islands Fisheries Science Center) "to promote the use of convolution neural networks to grasp the ecology of humpback whales.

NOAA has installed a passive sound monitoring device (hydrophone) in 12 places in the Pacific Ocean to record sounds in the ocean. Hydrophones are installed at breeding grounds and wintering spots of certain humpback whales such as the Saipan of the Pacific and Kona of Hawaii and have become able to record the 'hail' of humpback whales exchanged during breeding events etc. It is. Audio data is recorded by a device called HARP (High Frequency Acoustic Recording Package) that records sound at high sampling frequency with high quality. Since the main elements of humpback whale voice are concentrated from 100 Hz to 2 kHz, in the analysis, processing to reduce the sampling frequency from 200 kHz to 10 kHz was done. Nonetheless, the total capacity of the data has reached as much as 9.2 terabytes (TB).

If you convert the sound data into spectrograms that are displayed divided by the height of the frequency, some data includes noise (medium) of unidentified unknown (in addition to the humpback whale) (left), noise emitted from HDD of HARP It was said that it included the). When analyzing, processing is performed using ResNet - 50 which is a convolution neural network for image classification, extracting the sound of the desired humpback whale by removing various noise. If the frequency of the sound is constant, it is assumed that the sound is not from humpback whales, but noise from some kind of machine, a ship passing nearby, or the like. Google has conducted noise removal processing by using a method called per-channel energy normalization (PCEN) on the original voice (upper part of the figure below), and succeeded in extracting only the voice of Humpback Whale highly accurately (Lower part of the figure below). In this way, the team made it possible to grasp precisely what area humpback whales are active in which area. The following graph is one such example, with the vertical axis being the year, the horizontal axis being the moon, the circle size indicates the number of detections, the blue indicates the detection at the Kona, and the red indicates the detection at Saipan. The size of the circle seems to show a certain pattern, and it shows how many humpback whales were recorded in which area in which year of year. 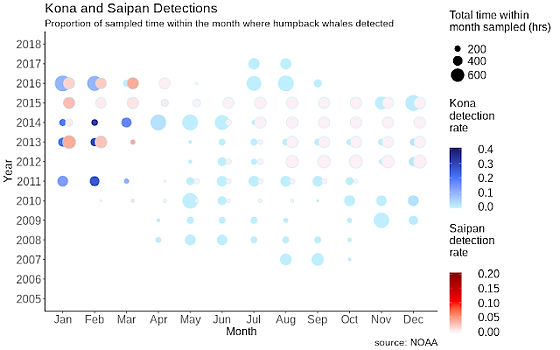 It is practically impossible to analyze the vast amount of data that spans 15 years by human force, and an example that AI using a convolution neural network can help to grasp the ecology of natural animals Was shown. It is expected that further analysis of big data and data mining using AI will further accelerate in the future.