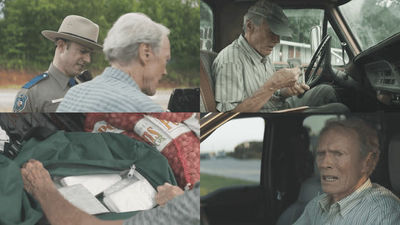 A trailer of Clint Eastwood 's latest work " THE MULE " was released, based on an article published in the New York Times magazine in 2014. The director of Eastwood plays a carriage of drugs in the 80s who is the main character, and the appearance as a movie actor has been the " special seat of life " in 2012.


Opening the trunk of the stopped car is a male in his 80s named Earwood playing Earwood. It is an old boy who gets a breath just by opening the trunk.

There was an inconspicuous green bag. When Stone opens the bag, there are a lot of drugs in the bag inside.

To the stone who calls out unintentionally ......

A sheriff called out, "Do you need help?"

Although it is a stone found in a sheriff at a dangerous scene, it responds to "ah, a policeman, Hello" in pretentious ways.

To the sheriff asking "Do you have anything to help?", "No, I do not have anything in particular, thank you." I will try to get through ... ...

The sheriff asked, 'What is this?', I will not quite get away from you. Stone replies "Pecan" and approaches the trunk.

Stone to talk that "I should have pecans at the place of me."

When the sheriff continues chatting with "Hey, Pecan?", "Yes, pecans. Make a terrible pecan pie ... you should not eat," stone talks with a joke .

Stone still continues talking with a smile, "I feel sorry for my husband and I do not do bad things for pecans", so I can not see it as a drug trafficker.

A sheriff who turns around with a steep face at a stretch as I heard "bow-wow" from the back and a dog's bark. Stone also turns back behind.

It seems that the dog's barking echoes from the car that the sheriff came on.

The sheriff returns to the car and Stone frowns.

A dog that seems to be a drug detection dog came out.

Stone will be forced into a pinch of desperate situation.

The scene changes, "A stone that tells us that there is nothing more important than the family."

In the warehouse there was a figure of a man with a gun with Irezumi.

To a stone that does not destabilize the tense face ......

The man hands a big bag.

Before I started a shop, the stone in my 80s was in danger.

Stone to recite "I was a terrible father."

Wearing a bridal costume is a stone's daughter-like woman.

"And it was a terrible husband," Stone continues. It seems that the woman who attached her hand to the face of the bride was the wife of Stone.

It will eventually be marked by the Drug Enforcement Administration (DEA).

When a dubious man does not feel hidden and put on the back of the stone, an unsettling atmosphere starts to drift around the stone.

Stone to decide "this is the last" in mind.

DEA's hands approach to the stone.

Or is it ahead of the drug dealer group to drive the stone ahead?

The work that Stone got hands with living in life brought a lot of money to Stone ... ...

We gradually chase ourselves.

"I worked for things I want to protect ... really I am sorry," stone said.

"THE MULE" will be released nationwide from December 14, 2018 (Fri), and the date of publication in Japan is undecided at the time of article creation.