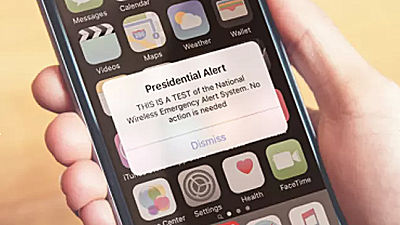 Presidential emergency alert message "Presidential alert" was sent to over 200 million people in the US mobile phone users on October 3, Wednesday, October 3, 2018 (local time) . Presidential alert that confusion was confirmed as "Is the message sent from the president to his terminal?", But the transmission seems to be completed successfully.

'What the hell is this': Americans stunned and annoyed after Trump sends out nationwide presidential alert
https://www.rawstory.com/2018/10/trump-texted-everyone-america-people-not/

The first FEMA Presidential Alert just hit phones across the US - The Verge
https://www.theverge.com/2018/10/3/17931750/fema-presidential-alert-test-reminder-trump-public-alert-warning-system

This is the actual content of the presidential emergency alert test sent. According to the schedule, in the message sent at 14:18, "This is a test of the National Radio Emergency Alert System, there is no need to respond."


Hey @ real DonaldTrump
Do not text my phone ever AGAIN.

I do not wanna say it no mo !!!
#PresidentialAlert pic.twitter.com/yuZUE5CX5k


It seems that an alarm has also arrived at Apple Watch.


The Presidential Alert was not sent by President Trumpe personally from the terminal, but was sent by the Federal Emergency Management Agency of the United States (FEMA) , and the system of the National Radio Emergency Warning System telling the weather and natural disasters was used It was. Alerts to inform weather and natural disasters were sent only to local residents, whereas presidential alerts are not limited to the area and are transmitted to almost all terminals in the USA It is a difference. However, there are terminals that do not notify test alarms for some reason.

However, when sending the Presidential Alert, some people thought that "President Trump is controlling telephones in the U.S.!", Confusion was seen.

President Trump now control all phones in the US!


Some people think that "Presidents can take personal contacts to themselves", such as "deleting me from your contact book. President alerts are the worst".


In addition, "I can not agree with this, people who object to the mechanism that action is necessary" ... ...


"What happens if someone hacks and uses Presidential Alert as a weapon, some people point out that the wrong information spreads and the whole country will panic."


Imagine if someone hacks and weaponizes the # PresidentialAlert . Nationwide panic, misinformation.


On the other hand, in Twitter Data, a mysterious phenomenon that the spike of the graph showing the timing of the tag "# PresidenstialAlart" at the timing is maximized at around 15:18 after 1 hour from the message transmission We are reporting.


Think you can tell when everyone got the presidential alert on their phones today? Pic.twitter.com/fRKBSI 4 IAL