Study to mathematically simulate the structure of complicated insect feathers 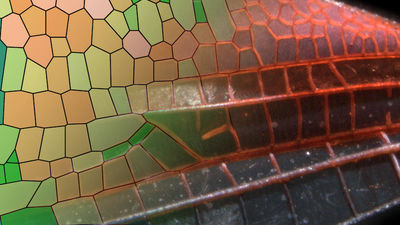 An " insect's wing pattern " composed of a chitin- made membrane and a wing vein (shikujiku) is a pattern of insects, which, like human fingerprints, has a diversified and complicated pattern which is said to be the same as one I have it. The research team at Harvard has created a mathematical model that can reproduce insect feather patterns with a few parameters and reports on "how the insect wing's wing veins are formed" .

Lord of the wings | Harvard John A. Paulson School of Engineering and Applied Sciences
https://www.seas.harvard.edu/content/lord-of-wings

The structure of an insect's wing depends on the type of insect, but basically it consists of a thin film of chitin and a thick pulse called "wing vein" that supports it. Wings of small insects such as Drosophila and Fruit fly are composed only of thick wing veins and membranes, and their patterns are symmetrical. In addition, large insects such as dragonfly are composed of a thick primary wing vein and a thin secondary wing vein running between them, and their feathers are divided into hundreds or thousands. The infinite pattern of insect feathers has attracted scientists since ancient times. For example, Leonardo da Vinci, a scientist and artist representing the Renaissance period, leaves sketches of feathers of dragonflies. In the 17th century Dutch biologist Jan Swan Meldam , I have shown illustrations of very fine dragonfly's feather patterns. Many other natural scholars also left a lot of detailed sketches and specimens of insect feathers.

Kathy Lee who gathered over 500 dragonflies from 215 different species, based on the sketch / specimen left by many scholars and the data gathered from various reference books and research books, the insect wing vein I created a database. Lee who studies applied mathematics at Columbia University has an idea of ​​linking geometry to the pattern of the feathers of dragonfly, and named the various polygon shapes made of the crossing wing vein as "domain" and colorized it .

Mr. Joe Dan Hoffmann, co-researcher of Mr. Lee said, "In order to make the complicated structure of the dragonfly's feathers more comprehensible and allow us to compare the geometric shapes of the whole species, I studied in what form what kind of domain is next to it. "

In addition, the research team succeeded in simulating a pattern in which a thin secondary wing vein diffuses from a thick primary wing vein based on a huge database and geometric analysis. The top of the image below is a simulated wing vein structure, and the bottom is the actual dragonfly feather. When you compare the two, you can see well that the shapes of domains partitioned by thin secondary wing veins are very similar. Christopher Rycroft, Associate Professor at Harvard University's John A. Paulson Engineering and Applied Sciences School , says, "We developed a growing model of wings of insects and succeeded in reproducing patterns that are similar to actual living things This model is useful for studying the evolution of insect wing structures and other patterned shapes. "