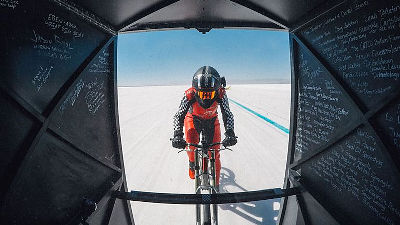 The highest speed challenge by bicycle carried out at the holy place Bonneville Speedway of America's fastest challenge, the American woman hits a number comparable to the Shinkansen which is 183.932 miles per hour (about 296.010 km / h) We established a record.

Dennis Mueller Colénec (middle) of an American woman who set a new record. Share of the racing driver · Mr. Holbrook (right) hides behind the racing car running and challenges the highest speed with less air resistance. Mr. Mr. Colénec is an athlete with a title such as former champion of mountain bike, who also sometimes beat out a record of 147.74 miles per hour (237.76 km / h) in Bonneville in 2016. By the way, the man on the left is John Howard of the coach. The bicycle on which Muller - Colénec is riding will fit in the fairing attached to the back of the machine for the drag race and will pedal just for maximum speed. Of course, the power used at the moment of the fastest challenge is only two legs. 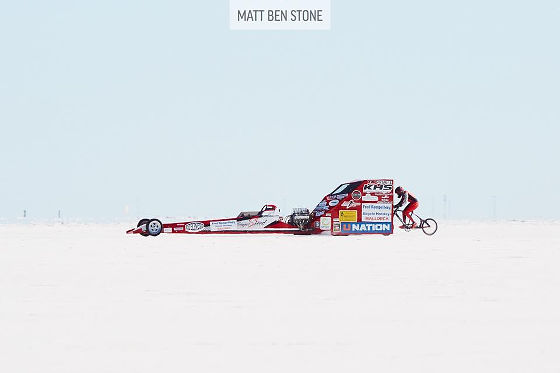 Viewed from the back, it is obvious that the bicycle and Mueller - Corenek are in the fairing. The fairing part in front of Mueller Colénec 's eyes is designed to fit the transparent panel and check the previous situation. 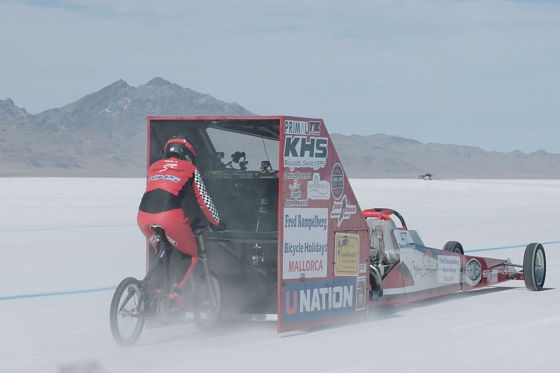 Looking at the situation under challenge from the fairing look like this. The inner wall is filled with drafts from various people and a wonderful writing. The state of the challenge can be confirmed with the image of the following in-vehicle camera. In the first stage, it is accelerating to a certain speed with the wire attached to the car, but from that point onwards, with a full power with a special pedal whose gear ratio was adjusted according to the highest speed, I barefoot the former unexpected record It was.


Orange signs are mile markers with an extra orange sign (between mile 4 & 5)! Black Small signs are qualter mile markers (except mile 2.25) mile 5-6 is the shutdown where Shea Racing - Shea Holbrook takes me from our 183.4 exit speed down to 110 mph (a 70+ mph in speed reduction in 1 mile) before she pulls away to allow the 110 mph wind to slow me down naturally. Video Credit to Ron Stoecky of Stoecky Films!


In the following movie published by Wall Street Journal, you can check the details of the bicycle in more detail.


Mueller Colenech who is on standby. It is a specially made bike made by KHS , and it is the fastest challenge specification with the full length longer than usual. The attached tire is 17 inches, adopting for motorcycles considering the stability at ultra high speed etc. Also, in order to cope with the ultra high speed, the front gear is a huge gear with 62 teeth, and the rear side is combined with 12 small gears, which is also a two-step bracket. Therefore, just by turning the pedal, this bicycle seems to run for about 40 meters. While accelerating, it will be pulled by the wire attached to the racing car to speed up ... ... 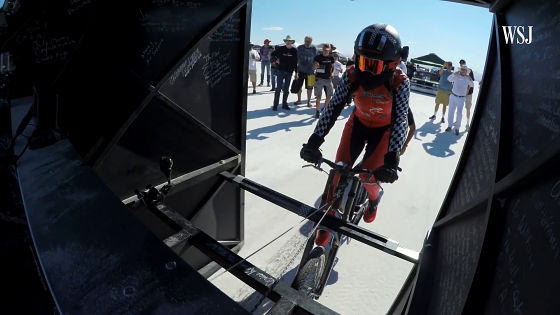 The wire disengages when reaching a certain speed. 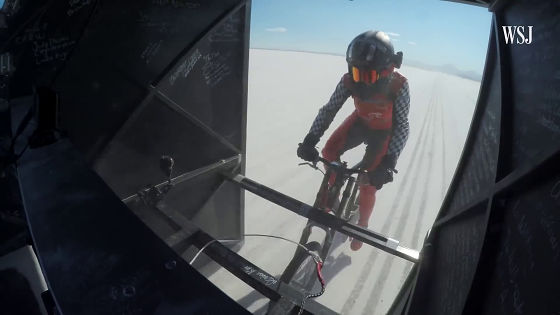 From there you pedal yourself. It looks like slow pedaling, but as mentioned above the gear ratio should be extraordinarily heavy for super high speed setting. 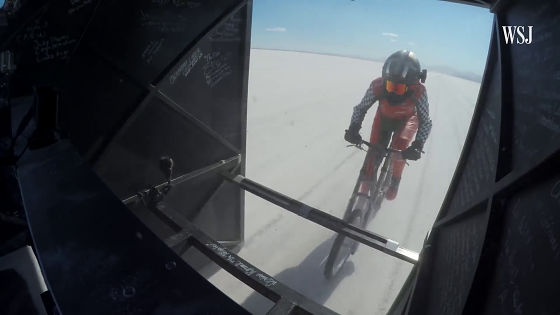 Racing cars and Mueller Colénec who run a vast course. Bonneville Speedway utilizes the vast plain formed at the altitude of salt lake at an altitude of over 1200 meters, and is the place where the fastest challenge that takes advantage of a very flat road surface is active actively. 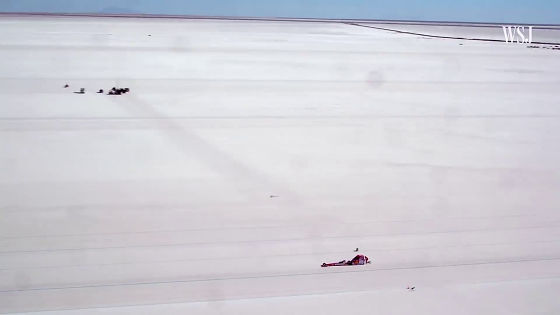 After the challenge, Mueller Colenech and the staff who are pleased to be informed of the record update. Since I have come so far, I definitely want people to achieve the first "human beings over 300 km / h" feat. 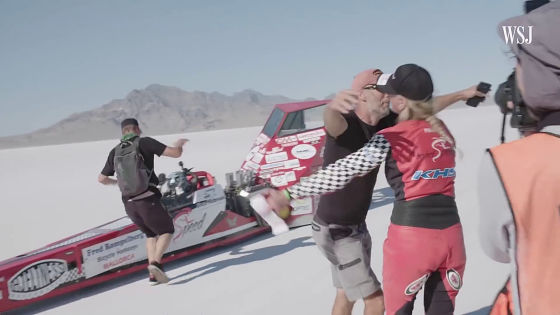