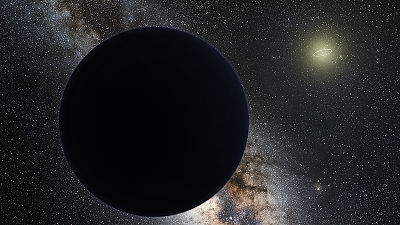 In the solar system to which the Earth belongs, it is thought that the ninth planet " Planet Nine " next to Mercury, Venus, Earth, Mars, Jupiter, Saturn, Uranus, Neptune is present. The existence of this planet itself is thought to be no less than 90% with a probability of more than 90% from various observation data etc. According to scientists, it has been waited for at least 1000 more years before human beings actually observe their appearance It is a pattern that you must have.

Planet Nine might be invisible for at least 1,000 years - SlashGear
https://www.slashgear.com/planet-nine-might-be-invisible-for-at-least-1000-years-03544238/ It is estimated that Planet Nine has 10 times the mass of the Earth and 2 times to 4 times its size, but since it exists in a place far away from the sun, it is necessary to confirm almost all reflection of sunlight from Earth can not. For that reason, Planet Nine is theoretically confirmed to exist, but it is considered to be a very difficult object to capture its appearance by optical observation using a telescope or the like.

In the illustration below which wrote a heavenly body name, a constellation, etc. in the above-mentioned expected illustration, the sun is drawn around the upper right, but the ring around it is the solar orbit of Uranus. You can feel how far away the Planet Nine drawn far before it is located. Planet nine is thought to be a celestial body made of ice, but as mentioned earlier, it is too far away from the sun to reflect the sun's light. The apparent brightness of Planet Nine is said to be 160,000 times that of Uranus and it is a good level to say that it is almost impossible to observe its appearance by optical observation.

Furthermore, Planet Nine is considered to be located in the direction where the Milky Way Galaxy exists as seen from the earth. Because the Milky Way galaxy is "bright" so that it can be confirmed with the unaided eye even if the clear night of the air is confirmed, even if Planet Nine is positioned even before it, it will be drowned out by the light of the Milky Way Galaxy , It is considered to be hopeless to observe its appearance until the positional relationship is improved.