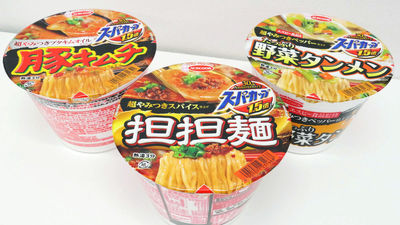 "Super Cup 1.5x Pig Kimchi Ramen Ultra Addictive Butakim Oil Finish" (200 yen tax excluded), the pictures filled with swine kimchi looks appetite in a large package with presence. The super immovable series is said to have been developed with the taste of soup and the richness of taste as a key word, it seems that it is becoming delicious becoming addictive to eat repeatedly. Contents amount is 107 g. In addition to "powdered soy sauce", soup is made of "pork extract" and "pork seasoning" materials that increase the feeling of pigs, such as "fish extract" and "onion powder" are also used. In addition, it contains quickly "flavored pork", "Chinese cabbage kimchi", "chili pepper", etc. It contains not only seasoning but also ingredients firmly in porcine kimchi. 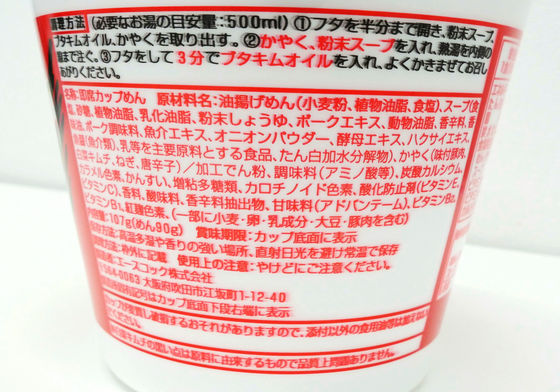 Heat quantity per meal is 476 kcal. When opening the lid, powder soup, quickly, and butakim oil was contained. 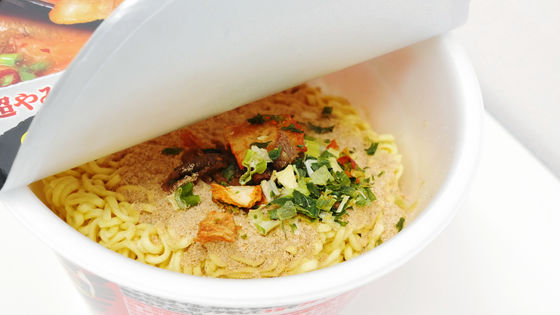 Pour hot water to the inner line and wait 3 minutes. Pork thimb oil is to be kept warm on the lid. Open the lid after 3 minutes, put in butakim oil and stir well if done. A rich flavor of kimchi drifts from the cup. 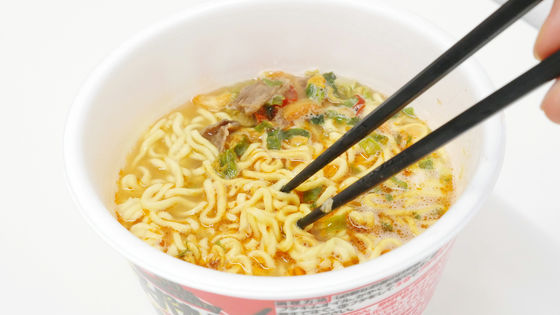 The base of the soup itself is fancy, but the hot potato oil and hot peppers included quickly have increased the appearance of kimchi, the impression that as a whole it is spicy. Slick noodles are good for snacks and can be eaten more and more, but if you eat it with a spicy spoon, sweat will blow off enough to eat. Because it contains 1.5 times the usual amount, even one stomach swells your stomach. 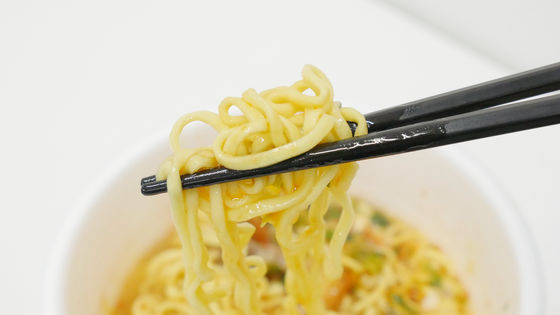 Kayaku's Chinese cabbage kimchi has a sharp contrast to the kimchi, which is a shakiyaki, and it was felt strongly that it was sweet kimchi when eating it with pigs. 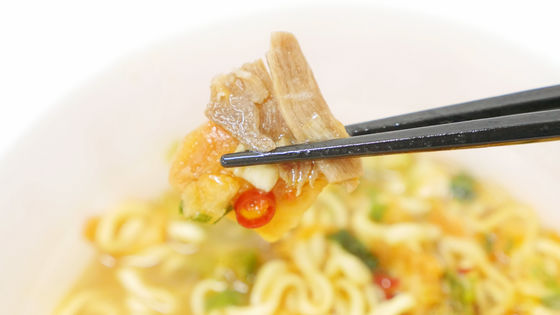 Next, I'll eat "Super Cup 1.5 times Burdened Noodle Super Added Spice Finish" (200 yen tax excluded). From the photographs of the package, it seems that ragged rice meat that is indispensable for the noodle shochu has entered. The content of Bamboo noodles is 124 g, and some soups make you feel the likeness of colored noodles such as "Negigora" "Sesame Powder" "Chillies" in addition to the common ingredients such as "Pork Extract" and "Soy Sauce". At first, "chicken · meat pork with pork", "goat", "Okara powder" etc. were contained. The calorific value is 553 kcal. Open the lid and quickly enter the powder soup, liquid soup and spice. Continue quickly enter the powder soup, pour hot water to the inner line and wait for 3 minutes. Liquid soup and spice are postponed, and liquid soup does not need to be warmed up especially on the lid. Open the lid after 3 minutes and put liquid soup and stir it ...... 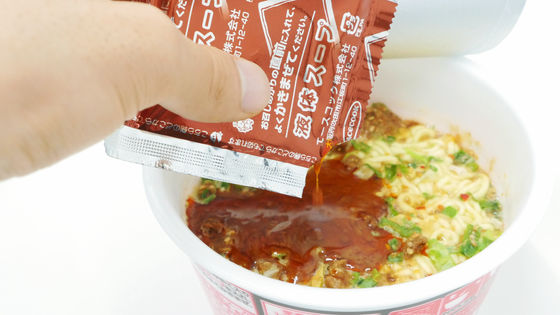 Finally it is completed with spice. . Sesame seeds and sesame seeds used soup has a savory fragrant flavor, and it is increasingly tolerant to the noodles. The spice after-mentioned has a strong aroma like pepper and spicy taste spreads in the mouth. 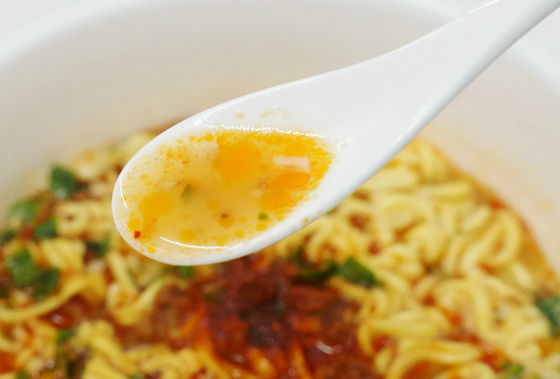 I squeezed noodles with meat savory and green onion, I felt strong like noodles, the spice's exquisite pain made me habit and I could not stop eating hands. 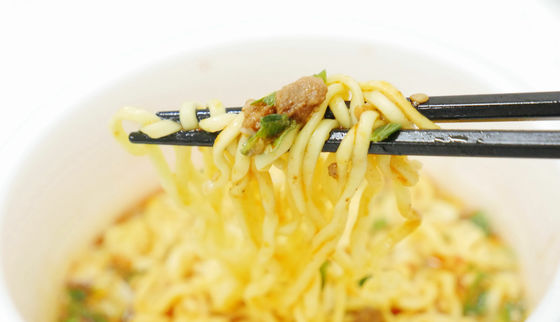 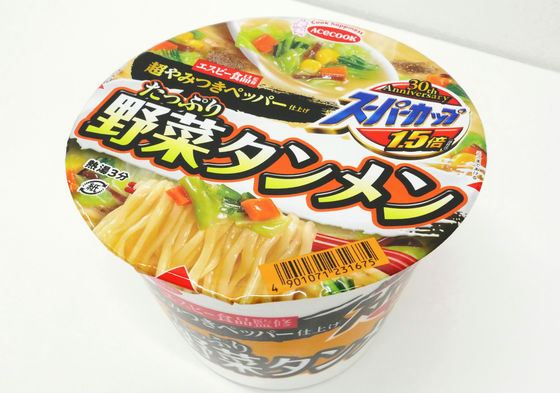 The content volume is 108 g, and "soup" chicken seasoning "" chicken powder "" onion powder "etc. are used, and in a word it is" cabbage "" chingengae "" caring "" cone " Vegetables line up, interesting "Chikage" is also contained in the texture. The calorie consumption per meal is 469 kcal. First of all, put the powder soup and water quickly, and pour hot water to the inner line. 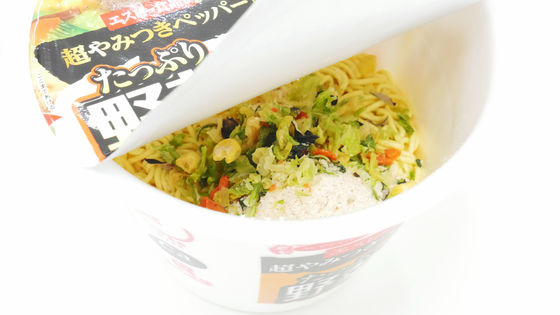 After 3 minutes, open the lid and put the ultra addictive pepper and it is complete after stirring. 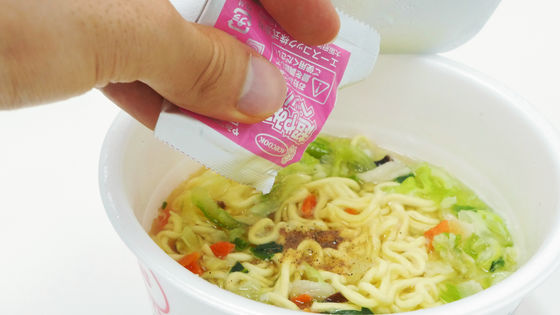 With the addition of super addictive peppers, when you drink the soup, a strong stimulus of Pepper spreads into your mouth and guts, drinking soup with 2 mouths, 3 mouths at last. 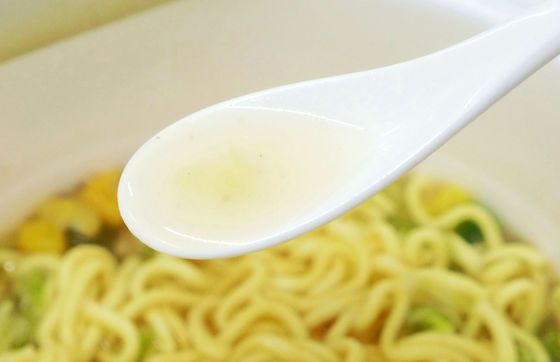 By stirring well after putting pepper, peppers are also entangled with noodles, making it an exciting taste. 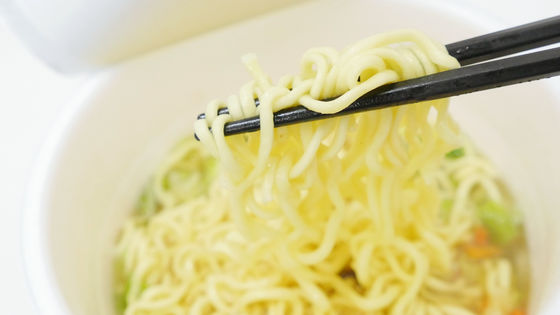 It is also a nice point that you have plenty of vegetables with sharp texture. 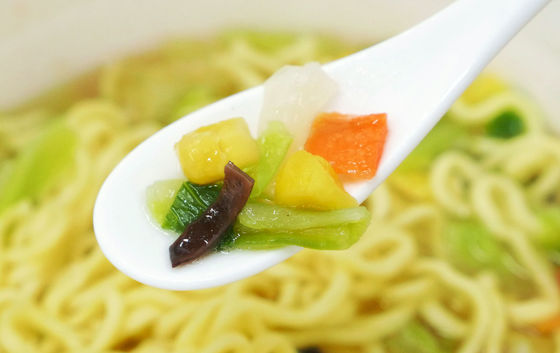