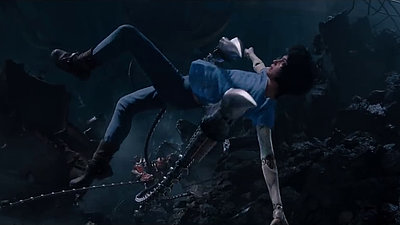 The official trailer of the movie " Arita: Battle Angel " to be released in December 2018 has been released. It has a length of 2 minutes and 30 seconds and includes not only what kind of girls are Arita, but what actions they will show.

Girls are given hands and prostheses from Ido and begin to live their life as "Arita".

The Kuzu Ibaraki that spreads under the city of Alem in the air is made of scrap discharged from Zarem and the residents build their own culture by reproducing the scrap.

Arita familiar with the life in the city.

On the other hand, Arita who is said to escape from id, will boldly face up against the enemy.

When I saw Arita's fight, I idiotic to say "What's the matter."

Actually, Arriott turned out to be the last one who inherited the fighting skills lost 300 years ago.

A falling ship on the outskirts of the city

I will discover a new body inside the ship.

This body is perfect for battle, and it is possible to emit plasma from the fingertip.

In this way, Arita will spare himself to fight against further enemies ....

This work is based on Yukito Kijyo's manga "Gun Musume". It was the director Guillermo del Toro of "Pacific Rim" who recommended "gun dream" to producer John Lando. Director of Mr. Randor and James Cameron liked the work quickly and gained the right to cinematize, but in order to make the work better it produced "Avatar" in the beginning. While doing so, Cameron will also oversee the sequel of Avatar, decided to entrust the work to Director Robert Rodriguez who had wonderfully summed up the script written by Mr. Cameron over four months. It seems that it finally came to completion.

When Landor came to Japan with the footage of the world's first show in June 2018, he commented on this work as follows.

Q:
Although I was convinced of seeing today's video that the film work has been sent out to the world such as "Titanic" "Avatar" and this work can be one of them, this work, which is the content originated in Japan, What kind of elements do you think are loved elements in the world?

John Lando:
It is the character of the hero called Arita. Cameron knew about this manga, there was a 13 - year - old daughter. I was watching the process of how teenagers get suffering and discover myself. And Professor Kijo draws the process that the character is proud of himself in the work, and is trying to answer the question of what the human being is human. Arita is a cyborg, but there is human nature.

Q:
Although it is said that it was made into a movie over a long period of 25 years, how did James Cameron encounter the original "gun dream" and what points were you fascinated by?

John Lando:
Actually, another film maker is involved. It is Mr. Guillermo del Toro. He is eagerly reading the "gun dream" series, and he told me this work, and we really liked it.

Q:
Why is Aritor's eye big?

John Lando:
Eyes are windows of mind. As you enlarge the window you can draw people into the character. In this era when we live, it is now possible for technology to really breathe into manga characters and if you are fascinated by the character, I think I will forget about the eyes anymore.

Q:
What is the percentage of completion of the footage I showed you today? What kind of work will you do in the future?

John Lando:
I was doing at the hotel this morning, I check the visual effect everyday and I am watching the details about 6 ~ 9 hours a day. Is the action going well? I am doing detailed work such as. I will score again this summer. I am looking forward to showing the finished work to the Japanese people again.

From the original author Yuki Kijashi also received expectation comments as below.

Yukito Kijyo:
A few years before the beginning of the first series of "gunmen", from 1994 onwards, there were several offers to oversee producers and directors from overseas, and at such time the editor's person said "If Cameron wants to make it into a movie What are you going to do with a joke? Strong heroine, action, science fiction, etc. There are many things in common with Cameron 's work and my work, but of course I did not dream at that time. And this time, thank you for bringing the latest picture to be released to the media for the first time in the world of "Arita: Battle Angel" in Japan where the work was first born. I am very much looking forward to the completion of this movie.