What does '93 penis' depicted in medieval embroidery pictures represent? 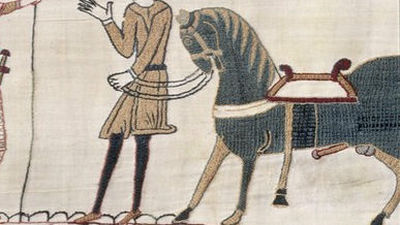 Bayou's tapestry depicts the story of Norman Conquest, where William I conquered England and became king of England in 1066. Although it is named "tapestry", it is actually a tapestry (textile) rather than an embroidery picture. One of the characteristics of the tapestry is that indeed 93 pens are drawn. Researchers are investigating what the meaning of this thing is.

The 93 penises of the Bayeux Tapestry: what do they tell us? - History Extra
https://www.historyextra.com/period/medieval/bayeux-tapestry-penis-why-norman-conquest-battle-hastings-william-conqueror/

93 penises on the Bayeux Tapestry show medieval people were obsessed with penis size too - Quartz
https://qz.com/1329226/93-penises-on-the-bayeux-tapestry-show-medieval-people-were-obsessed-with-penis-size-too/

Bayou's tapestry is said to have been made in the second half of the 11th century, which has not been so long since Norman Conquest occurred. The bayeux tapestry that has been kept for a long time in Bayeux cathedral in France is a long embroidery picture that has a length of 70 m only in the existing part although the two scenes at the end of the story are missing.

Many researchers have investigated tapestries of Bayou, a historical relic of France and England. As a result of the survey, it turned out that 626 people, 190 horses, 35 dogs, 37 trees, 32 vessels, 33 buildings are drawn in the tapestry. However, previous researchers have not counted the number of "penis" drawn on the tapestry. George Garnett , professor of historiography at Oxford University , investigated Bayeux's tapestry and confirmed that 93 tapestries were drawn in the tapestry.

According to Garnett, 88 out of 93 penises are horses' penis and the remaining 5 are human penis. Dogs are drawn in the tapestry besides horses, but dogs were not drawn. Also, the human penis was the one of the four living beings, and the remaining one was attached to the body of the soldier who died in the battle of Hastings . About the huge number of penis drawn on the tapestry, Mr. Garnet says "The tapestry producer is a man". According to Mr. Garnett, the desire to draw a large number of penises is a feeling that is often seen in adolescent men, and it is not like that of women. Meanwhile, from a historical point of view lectures on gender and sex, Mr. Andrew Lear says, "I think that the idea that" I must be a young man who wants to paint a lot of penises "is premature. The value standard in the century can not be applied as it is in the 11th century, "he said, while a large amount of penis does not necessarily prove that the embroidery is a male.

Mr. Garnet states that irrespective of whether the penis embroidery is male or female, he can interpret the intention put in the tapestry from the presence of the penis. In the story of Norman Conquest, William I who conquered England and Harold II who conquered conversely conversely have been spotted as the hero. Regarding these two protagonists, Mr. Garnet pointed out that "their horse has a particularly big penis." In addition, he says that the penis of William I 's horse is huge than the honey of Harold II' s horse is also an important point for the interpretation of the tapestry.

Just before the battle of Hastings started, the penis of a horse given to Mr. William I from Majido is drawn very large. This represents a recognition in the medieval world that "the size of male reproductive organs means strength for men", and conquistador William I included his own penis He said that he had to be a powerful man as a man. The idea that the size of the penis means masculine strength seems to have been widely accepted in medieval Europe. However, when you look at statues made in ancient Greece or ancient Rome, the penis is mostly small. As the standard of beauty in ancient Greece, there is the idea that "the fact that the penis is large indicates that the man can not control his own desire, that he is an unbelievable person", and the smaller the penis of men, the more reason It was considered to be an existential existence.

On the other hand, the penis in Japanese spring paintings are all drawn very large, but in Japan it seems that it was not superior or inferior depending on the size. Since every penis was drawn equally large, there was no idea that it depicts masculine powerfulness depending on the size of the penis. 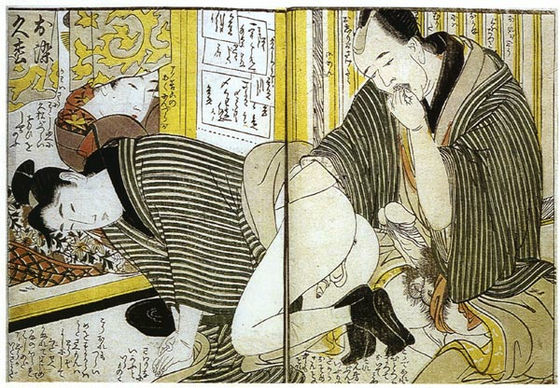 In addition, the bayeux tapestry has a scene in which a woman is harassing a priest whose identity is not directly related to the story of Norman Conquest. A figure with a naked man exposing the penis underneath is embroidered, and many researchers have been thinking about who the woman was and what reason this scene was drawn for why.

From the point that Mr. Garnett was decorated in Bayeux Cathedral as soon as the tapestry was made, I think that "This scene was drawn about a familiar scandal that occurred in the time the tapestry was made" . It can not be guessed what people mean by the people of the 21st century, but from the people of those days, it was a famous scandal to the extent that it could be understood that "Oh, that story is being expressed" It is said that it is not.

Tapestries decorated in the sanctuary, of course the clergymen should have seen so much, but at the same time many ordinary people also saw the tapestry, Mr. Garnet said. Therefore, topics such as familiar scandal are drawn with embroidery, and it is said that they are entertaining many people. Focusing on the penis drawn on the tapestry, researchers seem to have derived more interpretations than people can imagine. 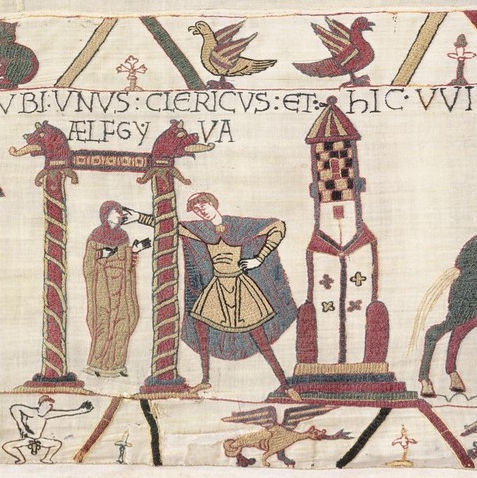