What is unfair and terrible history about 'treatment of teeth'? 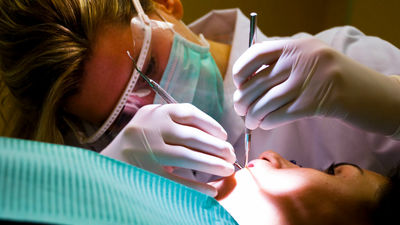 There are not a few people who say "I do not like going to the dentist at all", but dentistry in the 21st century has made great progress when compared to dental treatment in the past hundred years, pain and bloodshed are also kept to a minimum I will. About the history of such "treatment of teeth and teeth", the electronic version of the weekly newspaper economist in the UK reports.

Our relationship with teeth is uneven, messy and grim - Telling the tooth
https://www.economist.com/prospero/2018/05/16/our-relationship-with-teeth-is-uneven-messy-and-grim

French dentist Pierre Fochar , who was active in the 18th century, published in 1728 in the dentistry book " Dentist surgeon, or an outline of a tooth ", stuffing and orthodontic appliances for dental holes, for dentists We introduced a tool such as a chair. This book is also known as a book that introduced gingival disease for the first time to the world and has had a big impact on oral surgery in Europe.

At that time it was difficult to prepare pottery-made dentures for those who lost their teeth, and sometimes they took out teeth from the body and replaced them instead of dentures. As a result, the dentist and the dead body thief have a very close relationship, and after the Waterloo battle occurred in the 19th century, the teeth were pulled out from the corpse of many soldiers who died of the battle , and these teeth were " It is said that it was circulated called teeth. Also, even after Foschar made a major advance in dentistry, the majority of physicians maintain their posture to look down on dentists and barbers used to perform surgical operations in medieval and later European dental surgery Sometimes.

Dental treatment is characterized by the fact that disparity is very likely to occur between wealthy people and poor people, and poor people sometimes sell their front teeth for transplant. In the newspaper published in New York in the 18th century, it was said that the advertisement "2 ginny (about 52,000 yen in terms of modern value) sells front teeth" was published. In the picture below, the chimney sweeping husband covered with soot sells his teeth to the nobility and shows that the dentist is pulling it. Too wealthy people do not miss daily toothpaste to protect their teeth, teeth are healthy because they can afford to go to the dentist on a regular basis. In the UK, it is known that the poorest people over the age of 65 are eight teeth on average, compared with the wealthy. Studies in Sweden also show that children aged 3 to 6 in the poor have a four times higher risk of tooth decay compared to children in wealthy children. Also, from the remains unearthed from the Mayan civilization, those with jade embedded in the surface of teeth have been found, and from a long time "clean teeth" were associated with social status.

Although it is related to the difference between teeth and rich and poor for hundreds of years, in the 21st century carefully doing care at home such as brushing teeth frequently, protecting their teeth in a cheaper way than before It is possible. People who do not want to lose their teeth as much as possible are important to start habitualizing from their daily toothpaste.