Is it a healthy choice to say "Stop soda and drink fruit juice"? 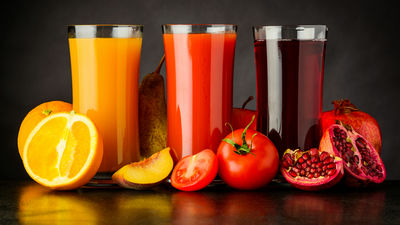 Fruit juice containing a lot of nutrients such as vitamins and minerals has a much healthier impression than carbonated drinks such as cola and cider. However, American magazines that conduct comparative tests on various products "Consumer report(CR) "Does drinking fruit juice instead of carbonated drink help solve health problems? In response to the question, I heard that the effect of health improvement can not be expected much.

It is said that Americans, such as coke and cider, are consuming carbonated beverages in the vicinity of 880 ml on average, which is regarded as a major risk of obesity and diabetes. Therefore, people are stopping carbonated drinks and drinking fruit juice is also increasing. In fact, fruit contains a lot of fiber, potassium, vitamin A, vitamin C, etc. Absorbs nutrients that tend to be deficient in American meals, so if you are a fruit juice 1.5 to 2 cups of vegetable juice CR recommended that 2 to 3 cups should be drunk if it is. However, while admitting the attitude of reducing the intake of carbonated drinks, Mr. Maxine Siegel leading CR laboratory food test laboratory, "vitamins, minerals and fruits in fruit juiceAntioxidantIs superior in terms of nutrition compared to carbonated drinks, but because sugar is contained at least as much as it is, it is not very suitable as a substitute for carbonated beverages ".

Originally, fruit sugar is contained in plant cells. Unlike animal cells, plant cells are wrapped in a sturdy cell wall, which takes time to digest. Therefore, when eating fruits raw, slowly the sugar is absorbed into the body. However, since the fruit juice is destroyed by the fruit plant cells, sugar is absorbed more quickly than when fruit itself is eaten, even if it is 100% juice, the blood sugar value will rise sharply. For example, one cup of grape juice contains approximately 1.3 times more sugar than the same amount of grape flavored carbonated drink. When the blood sugar level rises rapidly in the body,InsulinA hormone called secretion from the pancreas. For insulin,glycogenPromotion of synthesis · Utilization of sugar by adipose tissue · Promotion of synthesis of fat, excessive secretion of this insulin makes it easier for the body to fat. Furthermore, as risk of diabetes increases, Siegel explains that even if you take a large amount of fruit juice just because you quit carbonated drinks, the risk to health will not change after all.