Ideas such as using "cat" to tell human beings the risk of nuclear waste after 10,000 years High level radioactive wasteGeological disposalAlthough facilities that exist in countries around the world exist, these wastes have the problem that it is necessary to keep them underground for over tens of thousands of years. Because it is difficult to convey a message to humankind after 10,000 years in words, I will tell you the dangers of the facility using "Symbol" "Four Coma Manga" "Buildings" "Cats with Color Change by Genetic Operation" The idea is shown.

Present in New Mexico, USANuclear waste isolation test facility(WIPP) is the first geological disposal facility in the United States to permanently dispose nuclear waste generated by research and development of nuclear weapons. WIPP is not only nuclear sludge produced in the manufacture of nuclear weapons but also a place where daily necessities in contact with radioactive materials such as gloves and tools are disposed. Waste such as gloves and tools buried in the ground has radioactivity, but it will be detoxified over 200,000 years. But someday WIPP will be forgotten and forgotten by people, people without information on WIPP will come and build a culture on the ground where nuclear waste is buried, that culture will disappear ... ... should be repeated. The fact that a potentially dangerous wasteplace forgets the meaning of its existence is accompanied by great danger.

Even in 2014, radioactive substances leaked from WIPP, multiple staff were exposed to radioactivity, and it was found by the later investigation that the cause was "cat's toilet sand". 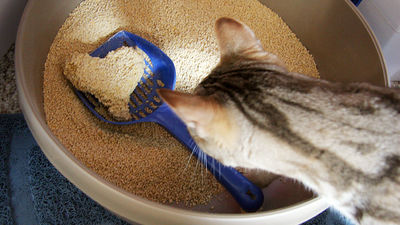 Because the accident like the above occurs, we can know the information because we share the language. But how do you communicate this problem to people after 10,000 years? There is a problem left behind.

The year of 10,000 years is tremendous. Ten thousand years ago, the new technology spread on the earth was "agriculture". It is almost impossible for us to predict what will happen after 10,000 years from now as you can see from the fact that people at the time are hard to predict the living of today.

From this, it is considered to use "symbol" instead of "language" to continue conveying WIPP information to the future. As smiley emoticons convey messages to people beyond language, symbols were considered more universal than language. In fact, emoticons indicating warnings are marks indicating that children are poisonousMr. YukIt is used in.


Known for his opinion such as "Nuclear Winter"Karl SaganHe insisted that using Wikipedia such as skull and cross could solve the problem of WIPP. However, the symbols also change the meaning over time. In recent years skulls and crosses, which are considered to represent "death", initially had the meaning of "regeneration" when it began to be used. Even in the illustration below, bones bordered by skulls and crosses are drawn beneath the crucifixion where Christ was crucified. However, a few centuries later, when the sailors write the name of the sailor who died in the sea in a logbook, they write bones that cross the skull next to it. Sailors now associate symbols such as skulls and crosses with "death".

In addition, a century later, the pirates noticed that skull and bone symbols could be used to frighten and obedient people. The pirate flag is also used as an hourglass, a blood-shedding heart,BlackbeardEdward Teach known as is known for using both as a pirate flag. Pirates in 1720John RakhamIs caught and tried, the Rakham pirate flag which crossed the sword in place of bone became to be regarded as a symbol of "danger" and by the 1800's the skull is used as indicating "poison" by the 1800's It will be like. And in 1940, the NazisAs a symbol of the SDFWe adopt skull. The sense implied by skull marks changed also when you look at the backpack or child clothes that uses the pirate flag as a design motif, you can understand that no one thinks it is "dangerous". In other words, symbols are not universal as well as languages.

So there is an idea to use a "visual story" instead of language or symbol to indicate the dangers of radioactive material.

The following is a story telling "people who suffer by touching radioactive substances". However, such a story is based on the premise of "reading from the top downwards", so if a person with a different cultural background reads from the bottom up, it will show the existence of "fountain of rejuvenation" It is said that it can also take.

Also, an architect who thought that "it is important to deliver the message to the future" proposes a method to set up things that scare people in dangerous places. It shows the idea of ​​installing a huge building like a prickly as below, but would it invite those who think "do research" in reverse? It is also being seen. Meanwhile, philosophers Françoise Bastide and Paolo Faburi thought that the most durable things human beings produced were "religion" and "belief". Religion and faith have been transforming forms, but they are telling the core message for hundreds of years. Therefore, the two proposed changing the color of the cat's hair to "radioactivity" by genetic manipulation, creating faith, making songs, and communicating the story of "radioactive cat". However, of course there are indications that changing the color of cats by genetic manipulation is too ethical.