I manage a chat service "SnapChat"SnapHowever, it turned out that version 2 of camera attached spectacles "Spectacles" announced in 2016 is being developed. Although the first Spectacles was a wearable device that was said to be "failed" because sales did not grow for large response, Snap seems to be a policy to make a successor appear briskly.

This was clarified from materials published by the Federal Communications Commission of the United States (FCC). The material is in a condition that it is largely omitted from the original, and there are no reference materials such as photographs and manuals at all, but from the wording such as "product description described as" wearable video camera "and" 002 "etc. , It seems almost certain that it is Spectacles with some improvements added.

Spectacles is a device with a built-in camera on the left and right of the frames of eyeglasses, you can shoot a movie of 10 seconds to 30 seconds by pressing a button near the lens and transfer it to the smartphone. It was launched at the end of 2016 and initially took up the topic but sales were sluggish and it was clear that it was in the state of having 40 million dollars (about 4.2 billion yen) in stock at the end of 2017. You can understand what kind of device the original Spectacles is by reading the following article.

What kind of wearable camera is "Snapchat original sunglasses type camera" Spectacles "that can cut out everyday scenes with one touch? - GIGAZINE 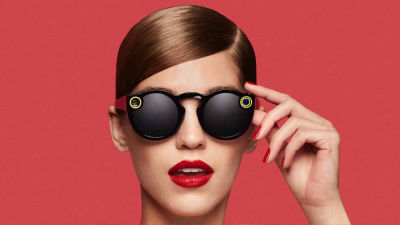 It seems that Version 2 overcomes the "weak transfer speed" which was the weak point of the first generation by supporting Wi-Fi of 5 GHz band. Also, it seems that FCC's ID label is displayed on the smartphone application instead of the device itself, but it seems that minor changes have been made, but it is unknown whether these changes will lead to recurring sales . Also, there is also information that the release date is unknown, but the price is targeting around 300 dollars (about 31,000 yen). Snap is not returning a comment on inquiries from Variety.