An aircraft that makes it possible to move a lot of people at high speed is indispensable to modern life, but on the other hand, an airplane burns a lot of fuel and flies while discharging carbon dioxide There is also the idea that some measures should be taken. Under such circumstances, development of electric aircraft that gains thrust by turning the motor with the electricity stored in the battery is getting more active instead of burning fossil fuels as in the past.

Norway, the largest oil producing country in Europe, excluding Russia, has become a current account surplus country due to the export of crude oil and natural gas produced from the North Sea oil field. With a strong economy with rich oil resources, Norway maintains a position to be close to the European Community (EU) alongside Switzerland through a referendum.

Although it is such Norway, the movement of oil removal is becoming active in the country. By 2025, all new vehicles registered in Japan are determined to be "zero emission" policies that do not emit exhaust gas, as well as a perfect electric propulsion ferry that does not burn oil has appeared. 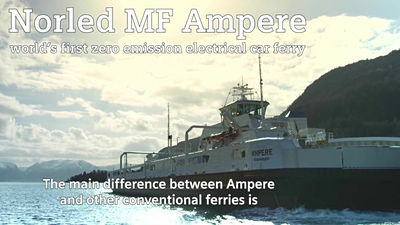 Mr. Hetil Soleviek-Olsen, Minister of Transportation and Communications, said, "Many people say we should exclude air transportation that spills air pollution and noise, but this is not a contemporary approach "It states the policy to take measures by using electricity for its power source rather than eliminating aircraft. Doug Forche-Petersen of the airport management company "Avinor" says, "There is no doubt that Norway will operate all aircraft electrically by 2040 in my mind."

It is pointed out that carbon dioxide gas emitted from aircraft may grow relatively in the future. According to the estimate by the International Air Transport Association (IATA), the number of passengers using the aircraft reaches 7.8 billion, about twice as much as the present by 2036, inevitably because the number of aircraft flights increases accordingly It is thought that carbon dioxide emissions will increase in the future.

As a measure to cope with this problem, the movement of "de-petroleum" is beginning to be seen among Norwegian airlines. Widelow Airlines, mainly based in Northern Norway, operating short-haul routes, will retire the existing Bombardier Dash 8 aircraft by 2030 and will switch to an aircraft flying by electric motor I have announced. Also, aircraft makers are also actively moving petroleum. While Avinor's Fork-Petersen likes this to the movement of the world of electric vehicles, "Aircraft manufacturers believe that they have to move ahead with electricization, because they miss it, It is the reason that it becomes "Tesla" of aviation machinery. "

By cooperating with British aircraft engine manufacturer "Rolls-Royce" and German electronics manufacturer "Siemens" in Europe's largest aircraft maker "Airbus", we will use the oil and electric hybrid aircraft "E-Fan X" in 2020 We are aiming to make it flying first. But the biggest problem here is the size and weight of the battery to store electricity. Unlike petroleum that consumes as much as it consumes, the battery will not get lighter no matter how much power it consumes. Therefore, it is one of the biggest weakness that electric airplanes are always heavy and they have to fly with large batteries loaded.

Glenn Rewelinn, who oversees research in this field at Airbus, also acknowledges that "The biggest challenge is the problem of power storage", and that there is still a major problem in batteries. On the other hand, "The field of batteries is also the most widely invested in the world, and technologies will surely evolve," it also shows how to look forward to future technological innovation.

R & D and investment for electric motorization is being promoted in the other world's most popular aircraft production area, America. Start-up which is invested from Boeing, a leading aircraft carrier and Jet Blue, a leading cheap airline (LCC)Zunum Aero"We are aiming to make small 12-seater hybrid aircraft appear by 2022. Matt Nap, the founder of the company said, "The price range we are targeting is at the same level as the current aircraft, but its operating costs are kept much lower than conventional aircraft, We will be able to reduce costs by about 60% to 70% ", he says about the merit of electric aircraft. Even with aircraft using existing jet engines, the biggest challenge in recent years is said to be "high efficiency". Every time a new model is announced, "It realizes 5% fuel efficiency compared with existing passenger aircraft, 5% is not a big deal but in the long run it can cut a lot of fuel and carbon dioxide emissions" Although we see the tone of the tone, although it somewhat shifts in meaning, "60 to 70% cost reduction" is not exaggeration to say that it is exactly a high efficiency of different dimension.

However, it goes without saying that there is a need to make a comprehensive judgment, including the aspect of the problem "carbon footprint" which is always accompanied with respect to power generation of power. If you burn a lot of petroleum at a thermal power plant to produce electricity in order to fly high efficiency electric aircraft, that would be totally overwhelmed efforts. For this reason, it is important to change the energy source that does not emit carbon dioxide, such as renewable energy, to electric power and to make it possible to let the airplane fly with that power.

Besides being able to expect a reduction in carbon dioxide emissions level as the power of aircraft becomes more powerful, it is also expected that the benefits of improving the living environment by reducing noise will be expected. Compared to jet engines that burn oil and fly, electric aircraft that generate power by rotating the propeller with a motor is expected to keep the noise low.

It is important from the viewpoint of "energy density" that it is important to fly a heavy and heavy aircraft at a high speed for a long time, which can store more electric power with a lighter battery. In the data of 2010, the energy (= energy density) stored in gasoline with a mass of 1 kg is "12,000 Wh / kg", whereas the energy density of the lithium ion battery is "100 Wh / kg" But at the level of "200 Wh / kg" twice that, literallyOrders of magnitudeIt is a reality that there is no choice but to say. Furthermore, lithium-sulfur batteries (1,000wh / kg) and lithium-air batteries (5,000wh / kg), which are aiming for practical application in the future, are still far behind in energy density comparable to petroleum.