I tried Alexa skill "Hey MIKU!" Which can talk with Hatsune Miku at Amazon Echo Amazon Echo that appeared in Japan on November 15, 2017. With AI Assistant's Amazon Alexa, you can instruct various instructions by speech recognition, and you can get more functions by activating an additional navigation application called skill. Among the more than 260 skills that Amazon Echo began offering in line with launch in Japan, skills that will allow you to talk to Hatsune Miku of VOCALOID "Hey MIKU!Does it mean that Amazon Echo will be more enjoyable? I thought that it was actually used.

You can find Amazon Echo setup and review by following articles. 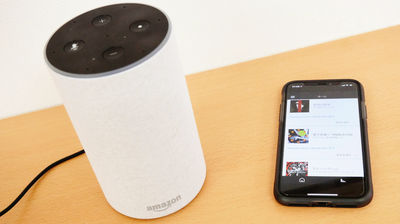 ◆ Enable skill
First of all, Amazon Alexa's app, orWeb browserActivate your skill from. This time I will use the iOS version of the Amazon Alexa application. Tap the top left to display the menu bar. Since the menu bar is displayed on the left, tap "Skill".

As the skill list is displayed, tap "Hey MIKU!" In the "Game Entertainment" column. If it is not displayed at the top, enter "Miku" in the search field and it will be displayed if you search.

As the detail screen of the skill is displayed, tap the "Enable" button.

Your skills are now activated. Skills can be used free of charge. ◆ Actually talk with Hatsune Miku
I put a figure of Miku Hatsune, a personal property of the editorial staff, on Amazon Echo and actually chatted. In order to talk with Miku Hatsune, you must first start "Hey Miku!" If you instruct Amazon Echo "Alexa, Heimik start" like the following movie, OK.


After launching, I did not know what to do for the time being, and kept silent for a while, "If you are in trouble, talk to Help, talk to me" and presented me an assistant from Hatsune Miku. The following movie actually looked at help.


Although I was dealing with only a short conversation, I tried various ways of speaking to you, but I answered, such as "I was glad" "Thank you" "Oh congratulations" "Hello!" "OK?" The pattern is still small. There seems to be many words that can be dealt with, and it often happens that reactions that do not engage are returned. For some reason why are you worried about Hatsune Miku "Are you OK?" Can be confirmed in the following movie.

When you talk to Hatsune Miku with "Hey Miku!" Appearance worriedly bothered - YouTube


I reacted firmly with a cute voice to the voice "I'm home" "I am going". When you let out of going out, skill automatically ends, saying "い っ っ っ ゃ い っ ゃ い" as you can see in the following movie.

In "HYY MIKU!" Hatsune Miku told you "Welcome back" "I do not want to go" - YouTube


Speaking of Hatsune Miku, it is still a song, so the following movie I asked you to sing a song. Unfortunately I can not listen to singing now, but depending on future updates it may be able to sing.

I tried asking you to sing to Hatsune Miku at "Hey Miku!" - YouTube


Actually speaking to Hatsune Miku at "Hey Miku!", I can not do what I can do with only a short response, yet I have not reached the level to get enough communication. However, it is pretty ants that the reaction is properly returned by the voice of Hatsune Miku against the contents spoken to here. It was a skill that I was excited about hoping for a more complicated conversation if it got more and more conversation patterns by future updates.