A trillion tonnes of ice lumps have finally separated from the Antarctic Larsen C ice shelf, what is the impact? 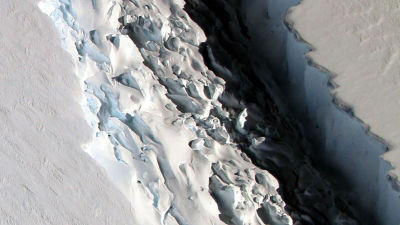 Of the Larsen ice shelves on the eastern coast of the Antarctic Peninsula, a trillion-ton ice block about the size of the state of Delaware in the United States at the tip of the Larsen C ice shelf is finally complete from Antarctica, whatever the cause. Separated into.

3 reasons to worry about that huge iceberg that broke off Antarctica – VICE News
https://news.vice.com/story/3-reasons-to-worry-about-that-huge-iceberg-that-broke-off-antarctica

One of largest icebergs ever recorded just broke off Antarctica
http://mashable.com/2017/07/12/massive-iceberg-breaks-off-antarctica-larsen-c-ice-shelf/

The Larsen C ice shelf, which was separated this time, is located in the northernmost part of the major ice shelves in Antarctica and is said to be the fourth largest ice shelf in Antarctica. Cracks on the Larsen C ice shelf have been observed since 2014, and in 2016 the cracks were expanding rapidly and it was predicted that separation would occur within a few years. Then, in January 2017, it was announced that a separation could occur within a few months.

Then, on July 12, 2017, local time, the research project 'MIDAS', which is observing the Larsen C ice shelf, announced that the ice block had finally separated from the Larsen C ice shelf. Researchers will continue to track the whereabouts of the ice cube named A68, and it will be observed so as not to cause an accident with the ship.

MIDAS also announced the separation of the Larsen C ice shelf on Twitter.

You can see how the separation happened by looking at the image below. The cracks that entered from the bottom of the image are expanding ... 'This iceberg is one of the largest ever observed, and it's hard to predict what it will look like in the future,' said Adrian Luckman, a researcher involved in the MIDAS project. It may remain, but it can also break down and fall apart, in which case some icebergs will remain in place for decades and some will be washed north and melted in warm water. I may go. '

If you put water and ice in a glass, the water level in the glass will not rise even if the ice melts. For the same reason, melting this ice cube does not mean that sea level will rise. However, if the ice shelves collapse further following this collapse, the glaciers behind them will flow faster into the sea, which may affect sea level in the future.

By the way, this is the state of the Larsen B ice shelf that collapsed in 2002 before it collapsed. You can clearly see the ice shelf line, but ... If you look at the pictures taken after the collapse, you can see that the edge lines have receded and the sea has a residual area. Also, the impact of the Larsen C ice shelf itself on sea level rise is not that great, but if another large ice shelf collapses due to the collapse of the Larsen C ice shelf, it will be 2-3 feet (30-90 cm). It has also been suggested that sea level rise in) may occur. 'We need to look at the big picture, not just the event of ice shelf separation,' said Professor Eric Rignot, a glaciologist at the University of California. 'It's about the whole change that's happening in Antarctica.'