All handmade amusement park with a full-fledged roller coaster There are various amusement parks in the world, such as '

Dizuma Land', which is an irony of Disneyland with Cinderella's corpse, and a mechanical amusement park ' Les Machine de L' il, ' where a giant elephant robot moves around. However, despite the fact that they were all produced by one man, there are Italian handmade amusement parks that exist up to the authentically-made jet coaster, and you can see the interview movie of the producer.


The roller coaster runs at great speed with a rattle. It is a roller coaster of a scale that is likely to be in an amusement park normally when viewed from a distance, but this one was made by one man. The producer of the amusement park is Italian Mr. Bruno. There seems to be various attractions as well as a roller coaster. This is a vehicle in which a person who is in Oli makes a half turn when he pedals in. 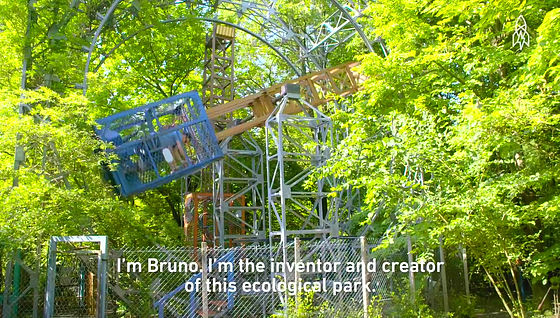 The place is located in Nervesa della Batteria, Italy. Before Bruno made the amusement park, when Bruno was looking at the scenery of nature, he saw a flying bird and came up with the idea of making an amusement park. It takes a lot of effort to create a large-scale attraction, but Mr. Bruno was passionate about creating an amusement park, saying, 'Let's do it!' It's a new attraction, or it's creating something with a fiery spark. Mr. Bruno can only work for about an hour a day, sometimes it will continue to work all day, and sometimes it will take about a month to create an amusement park. Amusement parks that we made little by little gradually become large-scale, and have completed even full-scale roller coasters. When you look at the amusement park that you have made yourself, you will feel proudly saying 'You are doing well!' Mr. Bruno is happy to see the children playing in the amusement park. The amusement park has already produced 40 to 50 attractions, ranging from small ones for singles to large ones. There are no motors in these attractions, and all need to be moved 'manually'. All the attractions begin to move as they push and hold in their hands. Parents with children will actually ride the attraction and teach children how to use, but 'parents should also remember their childhood,' says Bruno. Children playing on the trampoline. There is also a very long slide. When I see the scene where the children are happily playing in the amusement park, Mr. Bruno feels heartwarming unexpectedly. 'It's because it's a place where I took the time to build up where there wasn't originally,' Bruno says. In addition, the name of this amusement park is 'Osteria ai Pioppi' and the official website is also made.