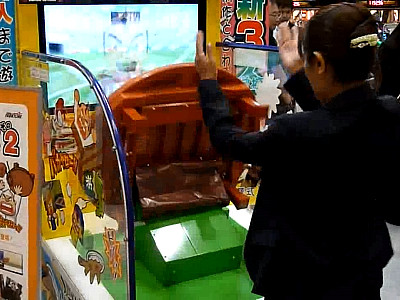 Chabudai gaeshi literally means table-flipping, and it's one of those customs in Japan that everybody's heard about, fantasised about, seen it on TV (as performed by the famously short-temperd father in Star of the Giants anime) but no one's ever seen it in real life, much less practiced themselves.

So when you hate work, hate school, hate funerals and hate life in general, you'd certainly get the urge to flip a table time to time, but in actuality you can't, unless you're ready to risk your properly-functioning-mentally-stable-member-of-the-society appearance. Frustrated much?

Taito's new arcade game Cho Chabudai Gaeshi! 2 table-flipping simulator must be the next best thing to real life table-flipping, and you won't need to feel miserable afterwards cleaning up the mess you made. The game was on display at The 48th Amusement Machine Show held at Makuhari Messe.

It's an improved version of the one released last year. Players can choose from Story Mode and Competition Mode. Up to four people can compete in the Competition Mode. If you're alone, choose Story Mode which will takes you through a number of enraging scenarios, forcing you to pound on the table and flipping it in the end. Here's a screenshot from the Part-time Job scenario. You're working at a fastfood joint where the cutomers will annoy the hell out of you by all possible means, to say nothing of the boss... You're the one in the coffin, raging against the injustice of your untimely death. Get up and flip the table! Here's a video showing the aftermath of your tantrum.

YouTube - "Cho Chabudai Gaeshi! 2" Flipping Table at Your Own Funeral


In competitive table-flipping, players can choose what objects to set on the table. 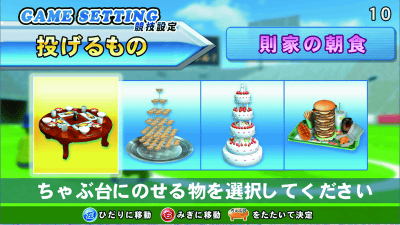 Flip the table as hard as you can to throw it as far as you can.
YouTube - "Cho Chabudai Gaeshi! 2" Table Flipping Competiton Part 1