How did ancient people survive the sun in the days when there was no sunscreen? When you go out, you need a hat, sunglasses, and sunscreen to protect yourself from the sun. increase. According to Pennsylvania State University anthropologist Nina G. Yablonsky, Homo sapiens has spent most of its history outdoors, almost naked. When exposed to sunlight,

eumelanin is produced to protect the skin, trying to absorb visible light and harmful UV rays. Because eumelanin is dark brown, the skin appears dark and “tanned”.

According to Professor Jablonski's research , it is believed that since prehistoric times, people's skin color has adjusted to local environmental conditions, especially UV levels. Specifically, people living near the equator in an environment where UV rays are strong have darker skin and are more likely to get sunburned, while people living in environments far from the equator where UV rays are weaker have brighter skin and less ability to produce eumelanin. It is said that it is not expensive.

Since prehistoric people were limited to their own means of transportation, it is thought that they would have been fine as long as they were able to cope with subtle seasonal changes, and the distance traveled during their lifetime was not so long. For example, people living in North Asia and Northern Europe who go to Hawaii and get direct sunlight can get painful sunburns, but in prehistoric times, such sunburns were rare.

However, it is believed that there were many deep wrinkles due to continuous exposure to the sun, unlike 'the skin of people at that time was not damaged'. 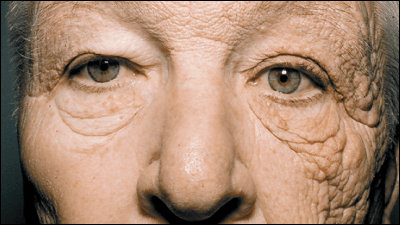 People began to spend more time indoors around 6000 BC, when settlements began to settle. Before long, in order to prevent the skin from being damaged by the sun and from being sunburned and blackened, it came to be used like a parasol or a hat, and the leftovers of plants and minerals were used as glue. A sunscreen was also developed. It seems that there are some creams of this kind that have survived to the present day, such as Myanmar's ' Tanaka Paste '.

Professor Yablonsky said, ``People may like the sun, but we are different from our ancestors.The relationship between humans and the sun has changed.You have to change your behavior to protect your skin. That's what I mean,' he concludes.